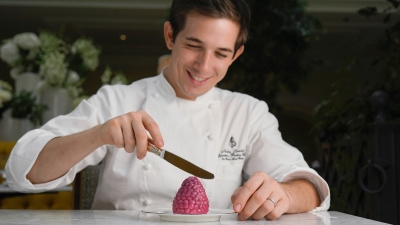 Dubai, U.A.E., 2021-Jun-22 — /Travel PR News/ — Dubai’s dessert lovers have reason to be delighted, with the arrival of one of the world’s most promising pastry talents to the city. Chef Nicolas Lambert, who joins Four Seasons Resort Dubai at Jumeirah Beach and Four Seasons Hotel Dubai International Financial Centre, has taken the reins in his new role as Executive Pastry Chef. Lambert, who boasts a remarkable resume, honed his craft at fine eateries and hotels across France before moving to Caprice Restaurant at Four Seasons Hotel Hong Kong. It was there that he was recognised as the youngest ever “Asia’s Best Pastry Chef” by The World’s 50 Best Restaurants. Following a successful stint at Four Seasons Hotel Lion Palace St. Petersburg, he has landed in Dubai with his suite of signatures that both flavourfully and visually captivate.

“I am excited to join the Four Seasons Dubai family and to get to live in and learn from this dazzling metropolis,” says Lambert. “I feel that Dubai is a budding culinary scene that appreciates passion, creativity and above all dessert! Getting a sense for the city and drawing some inspiration from it is my first order of business; after that, we design, cook and bake with my talented team. We all look forward to delivering nothing but sweetness to Dubai’s foodies.”

While Lambert’s masterpieces are a feast for the eyes (and camera lens), the magic happens when lips purse and eyes close. With a distinguishable flavour profile, Chef’s pastries tend to deliver all of the textures and tastes in each bite. He is known for being a believer in simplicity, using a maximum of four textures and three flavours in each pastry. An abundance of chocolate balances with seasonal and local ingredients to captivate the taste buds.

Plans are afoot for Lambert to truly announce himself to Dubai’s culinary crowd, with new creations, pop-ups and exciting activations set to be announced. Guests visiting either Four Seasons Dubai properties can soon get a taste for Lambert’s creations at Shai Salon and Penrose Lounge. Stay tuned.

Those interested in reserving a dining experience with Four Seasons Dubai may do so online by visiting: