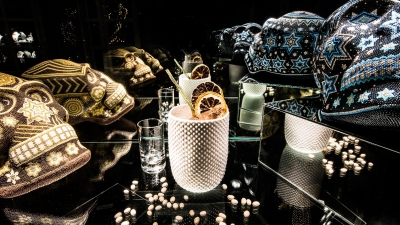 Mexico City, Mexico, 2018-Oct-09 — /Travel PR News/ — In the beginning, Fifty Mils was the best kept secret of Four Seasons Hotel Mexico City, but in a short period of time it has become a first class reference on mixology and an industry leader in Mexico. Now,  Fifty Mils has, in just two years of existence, been named #45 on The World’s 50 Best Bars, the industry’s most prestigious award.

On October 3, 2018, during a ceremony in London, Israel Lara, Four Seasons Hotel Mexico City Public Relations Director, received in the name of the Fifty Mils team this recognition that represents a triumph without precedence and source of pride for mixology in Mexico.

For Israel Lara, “Reaching #45 in the most important list in the industry is truly an honour, and it was a goal we set from the beginning; being able to achieve it in a short period of time is a sign that we made the right decisions from the start, with a team that gives everything behind the bar to have guests always wanting more.”

Being part of “The World’s 50 Best Bars” is the cherry on the cake of a 2018 full of milestones for Fifty Mils. The bar was recently one of four finalists in the Best International Bar category at Tales of the Cocktail, and also won, for the third time in a row, World Class Mexico and was awarded the Best Hotel Bar in Mexico on the Hotel Awards 2018, by Travel + Leisure.

Through a combination of great atmosphere, an innovative menu and cocktails made of great ingredients and stories, Fifty Mils has stood out for surpassing consumers’ expectations, by being ahead of the curve with products such as its limited edition mezcal Four Fifty, ready-to-go cocktails and reinventing brunch alongside premium brands such as Buchanan’s, Stella Artois, and G.H. Mumm.

For so many reasons, Fifty Mils raises its glasses and celebrates an outstanding year.

October and 2018 in general represent many reasons for Fifty Mils to rise the glasses and celebrate for an outstanding year.