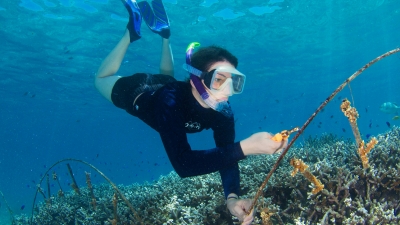 Mauritius, 2018-Oct-09 — /Travel PR News/ — A decade since opening, Four Seasons Resort Mauritius at Anahita chose its milestone celebration to not only reflect on the achievements of the last 10 years, but as a chance to make a commitment to the years ahead, with the launch of La Passe Cadet Reef Restoration Project in partnership with marine education and conservation specialists WiseOceans.

On October 1, 2018, the Resort hosted an official opening ceremony for the Coral Cabana – the new home of the WiseOceans Marine Educators and their interactive demonstrations and displays on Bambou Beach, where General Manager Michel Volk was joined by Mr Sundy Ramah and Mr Vikash Munbodhe from the Ministry of Fisheries, to recognise the importance of this project’s launch and to share the celebrations with the Resort’s guests.

“This is a milestone celebration for our Resort. I am so proud of all that we have achieved over the last ten years, all of which has only been possible thanks to our incredible team,” comments General Manager Michel Volk. “And while we made sure that this was a day in which to thank our employees with great celebrations, we also wanted to commemorate this day with the launch of something that symbolises another vital element to our Resort and destination’s future: the environment. This project will help restore coral in the lagoon, but just as importantly, it will allow us, together with WiseOceans, to educate as many people as possible about how they can play their part to protect the environment.”

The Resort has been in partnership with WiseOceans since 2015 to offer the Marine Discovery Programme, which allows guests to better connect with their surroundings during their stay. In March 2017, Four Seasons and WiseOceans began to put in place the foundations for the creation of the Reef Restoration Project. In partnership with the Ministry of Fisheries, WiseOceans identified the location of a new underwater nursery from where broken fragments of coral could be placed for recovery and re-growth, before being transplanted back to the reef once they reached a suitable size. Following the successful 18-month trial, La Passe Cadet Reef Restoration Project now aims to restore 10,000 square metres (100,000 square feet) of reef.

“We are thrilled to officially launch this exciting and important project with Four Seasons,” says Georgina Beresford, Funding and Project Development Manager at WiseOceans. “After many months of hard work, we now have a full and thriving coral nursery at La Passe Cadet. These new corals will be transplanted on to the reef to increase cover and diversity in this area of the lagoon. However, we believe the most essential element of this project is the education and outreach we can achieve. Saving coral reefs is not just for marine biologists, but for all of us, and through our work with Four Seasons we hope to inspire and empower people to be the change they want to see in the world and to keep our oceans healthy.”

In support of the La Passe Cadet Reef Restoration Project, WiseOceans has also launched its Promise to the Reef campaign, following the success this campaign has already enjoyed at Four Seasons Resort Seychelles. Promise to the Reef encourages staff and guests alike to make their own pledge on what small lifestyle change they can make to support the global effort to reduce climate change. During the official launch of the Reef Restoration Project a total of 28 promises were made.