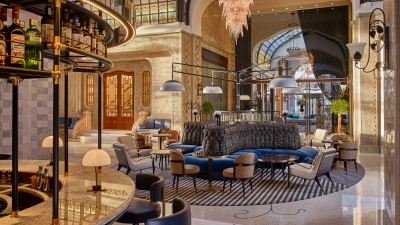 The iconic Budapest landmark property once again celebrates the prestigious designation, for the sixth consecutive year

Budapest, Hungary, 2022-Apr-27 — /Travel PR News/ — Forbes Travel Guide unveiled its official 2022 Star Awards Rating announcement today (April 26, 2022), awarding Four Seasons Hotel Gresham Palace Budapest a Five Star rating, its highest honour, for the sixth consecutive year. The property is the only hotel in Hungary that received the Five Star designation, retaining its rating for the sixth time, in addition to the Four Star award that its Spa received, which is also unique to the Hungarian market – in fact, no other spa was rated in Hungary.

“It’s an honour for me to work with such a dedicated and enthusiastic group of professionals who are always eager to create unique experiences for our guests, while providing intuitive and reliable service. The last two years have been a whirlwind, but we’ve come out stronger because we have fantastic people to rely on,” says Yves Giacometti, Regional Vice President and General Manager of Four Seasons Hotel Budapest.

Offering 160 luxurious guest rooms, 19 expansive suites and spectacular, light-filled, grandiose event spaces, the property is an Art Nouveau landmark on one of Europe’s most scenic rivers, situated in the heart of the city’s vibrant gastronomical district. Offering breath-taking views of the Royal Castle, Buda Hills and the majestic Chain Bridge, Four Seasons Hotel Gresham Palace is an iconic destination in and of itself.

“Travel has come back strongly, and the resilient hospitality industry is creatively rallying to accommodate the increased occupancy demand for most regions,” says Hermann Elger, CEO of Forbes Travel Guide. “While the industry faces some lingering issues, the 2022 award winners proved ready for those challenges and more, demonstrating the best that luxury hospitality has to offer.”

Forbes Travel Guide is the only global rating system for luxury hotels, restaurants and spas. Their anonymous professional inspectors evaluate based on up to 900 objective standards, with an emphasis on exceptional service, to help discerning travellers select the world’s best luxury experiences. The only way to get a Five-Star, Four-Star or Recommended rating is by earning it through our independent inspection process.