The Hotel has been named:

The Food and Travel Bahrain Awards

The world-renowned Food and Travel Arabia Magazine and the Bahrain Tourism & Exhibitions Authority teamed up to launch the ultimate standard for awards in the Kingdom of Bahrain, the prestigious Food and Travel Bahrain Awards. From the initial call for nominations back in February 2015, more than 63,000 votes were cast and evaluated to get the final results and announce the winners at the awards ceremony in the grand Bahrain Ballroomof Four Seasons Hotel Bahrain Bay.

Four Seasons is focused on harnessing the company’s culture – commitment to its people, a passion for service, and evolution through continuous guest-focused innovation – to ensure Four Seasons continues to redefine and set the standard for luxury travel around the world.

Whether recognised by industry publications or guests, the awards and accolades reflect the commitment ofFour Seasons to setting the standard for service excellence and the dedication of its employees to providing the ultimate guest experience.

Greg Pirkle, General Manager of Four Seasons Hotel Bahrain Bay, says: “We are the only luxury hotel in Bahrain recognised with six awards for our outstanding service and people. I am extremely proud of our team for achieving this great accolade, as they are the true reason why we have been recognised with these prestigious awards. We are very grateful to everyone who believed in our efforts in service excellence, to His Excellency Mr Zayed bin Rashid Al Zayani, Minister of Industry, Commerce and Tourism and Sheikh Khaled Bin Humood Al Khalifa, Assistant Undersecretary of Tourism Affairs for their support, to Food and Travel Arabia Magazine and the Bahrain Tourism & Exhibitions Authority. Winning these awards speaks volumes about our dedication to service and guest experience and is indeed a great inspiration for us to continue impressing our valued guests with our impeccable service and care.”

Restaurant of the Year: re/Asian Cuisine by Wolfgang Puck

re/Asian Cuisine by Wolfgang Puck is located on the 50th floor of the Hotel and provides spectacular views of Bahrain Bay and the Manama skyline.  The elegant dining room exudes a refined and luxurious feel. Featuring Wolfgang’s signature, modern approach to traditional Chinese cuisine, the restaurant provides a “re”-evolution of what the master chef has been passionate about for the majority of his career.  Re reveals this culinary progression and demand for more refined Asian cooking including Japanese, Thai and Vietnamese influences.

“I am honoured to be awarded the Restaurant of the Year, Chef of the Year and the Best Chinese Fusion Restaurant Awards in a country that has cultivated so many talented chefs and great restaurants,” comments Brian Becher Executive Chef at re/Asian Cuisine by Wolfgang Puck. “I believe that the key to our success is to make an outstanding first impression. When we open our doors to our guests every evening, we have one shot to meet and exceed their high expectations. To me, anything less than excellent is a failure so I am very proud of my team for winning these prestigious accolades.” 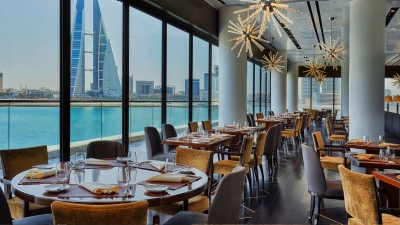