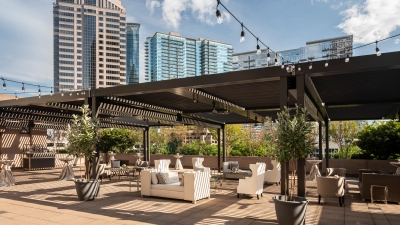 A portion of the room upgrades were completed in 2015, and now all 244 guest rooms, including 18 suites and five new terrace suites, have been updated with a contemporary classic motif that showcases modern design.

“We are thrilled to see how the refreshed room design and upgraded public spaces have complemented the existing, classic structure of the Hotel,” says Regional Vice President and General Manager at Four Seasons Hotel Atlanta, Yvette Thomas-Henry. “The timing could not be more perfect with all eyes on Atlanta in anticipation of football’s biggest game in February 2019.”

A cool-toned palette with pops of rich burgundy and aged brass fixtures were coupled with sensibility for a refined feeling of modernity.

The artwork in the guest rooms, suites and corridors was sourced from Canvas Art Consultants in Atlanta.

“The vision was to tell the local Atlanta story using a sophisticated collection of quiet, contemporary works,” says Matthew Whitaker, Director at Canvas Art Consultants. To accomplish this, Canvas Art Consultants engaged local artists to create commissioned works referencing architecture, relics, memory and ancestral heritage. “The design team was a dream to work with – they have exquisite taste and exacting standards. It was an honour to collaborate with Four Seasons Hotel Atlanta and Meyer Davis on this project and celebrate the artistic talent within our great city.”

In addition to the guest rooms and corridors, the spa, pool and fitness centre were also refreshed. New custom lockers were installed in the men’s and women’s locker rooms in addition to an upgrade to the steam rooms and saunas. The pool, which remains Midtown Atlanta’s only indoor saltwater pool, was completely refinished and paired with new lounge chairs and sectionals. The fitness centre is now equipped with state-of-the-art machinery such as Peloton bikes and SkillMill treadmills.

Meet Us at Four Seasons

Four Seasons Hotel Atlanta’s 50th floor Penthouse Ballroom, which was renovated in 2015 and flaunts the same modern feel as the refreshed guest rooms, now ties in perfectly with the Hotel’s Fifth Floor Terrace – one of two outdoor event spaces at the Hotel. The 7,000 square-foot (650 square metre) space now features an expansive louvered pergola – perfect for outdoor weddings, parties and other special events. The Terrace overlooks beautiful Midtown Atlanta and recently hosted the third anniversary of the Hotel’s bar and restaurant concept, Bar Margot.

Bar Margot, a collaborative concept by Four Seasons Hotel Atlanta and famed restauranteur Ford Fry, has remained one of Atlanta’s most popular dining destinations since its opening in 2015. Its warm velvet touches, coxy lounge seating and sleek artwork exemplify the design concept that is now carried throughout the Hotel, from the ground up.

“This update exemplifies the high level of service and rich comfort our guests enjoy with every stay,” says Thomas-Henry. “The design, finishes and attention to detail reflect our commitment to excellence.”

Reservations may be booked online.