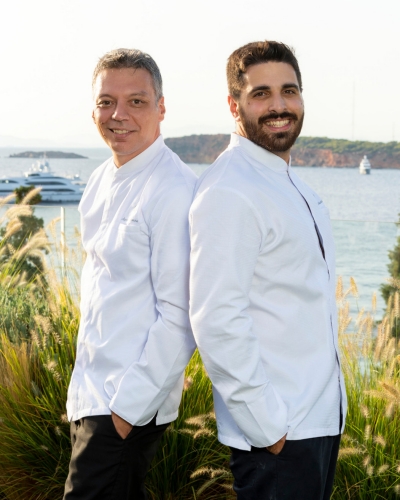 Athens, Greece, 2022-Sep-28 — /Travel PR News/ — Known as xenia, the Greek art of hospitality is legendary. So it is with a warm embrace and a proud heart that Four Seasons Astir Palace Hotel Athens welcomes two of the industry’s finest talents “home” with the appointments of Apostolos Dimou as Executive Chef and Michalis Chatzikalimeris as Executive Pastry Chef.

Dimou and Chatzikalimeris unite a passion for the rich flavours and heritage of their native cuisine with skills honed internationally in the world’s top fine-dining establishments and Michelin-starred kitchens. True to Greek tradition, underpinning their refined creations is a love of bringing people together over exceptional cuisine.

Dimou’s stellar career has seen him head the kitchens of venerable five-star resorts and restaurants around the globe. Inspired by a passion for the simple beauty of his family’s home-cooked food, his artfully rustic creations are renowned for their refinement of flavour and diverse techniques. Behind every dish is his heart-led approach and passion for creating connection through food.

Having honed his exceptional flair and finesse under the wing of Michelin-starred master chef Alain Ducasse in Athens, Dimou went on to head kitchens in acclaimed luxury settings from Romanos Starwood Luxury Collection to Sheraton Lisbon, before joining the Four Seasons family in Beirut, Mauritius and Seychelles.  Returning to his beloved Greece to take on the role of Executive Chef at Four Seasons Astir Palace Athens Hotel marks a pivotal moment in his luminous career.

Master pâtissier Chatzikalimeris is a confectionary alchemist, acclaimed for his vibrant and inventive artistry. From sculptural miniature chocolate olive trees to exotic caramel tacos, his gourmand creations interweave Greek heritage with international influences. Captivated from a young age by flavours of traditional Greek delicacies, he refined his skills under maestros including The Dorchester’s David Girard and Thanasis Tsagliotis, owner of pastry shop La Maison.

Chatzikalimeris’ impressive résumé includes tenures at luxury Greek venues from Sheraton Resorts to Adronis and Hakkasan’s Ling Ling, and Courchevel’s La Mangeoire, alongside a coveted role as brand ambassador of Callebaut Chocolate in Greece. Designed to delight both the palate and the eye, each delicate Chatzikalimeris confection blends creative colours and aesthetics with an expressive edge.

Together, Dimou and Chatzikalimeris are set to offer guests an exceptional experience across the eight dining outlets at Four Seasons Astir Palace Hotel Athens. From the sizzling Latin American signatures of Helios – named after the Greek sun god – to the homegrown magic of farm-fresh flavours at beachfront Taverna 37, they will combine their unique artistry and global inspirations with the authentic Greek warmth and hospitality that they hold so dear.

The dining at Four Seasons Astir Palace Hotel Athens is at the heart of a world-class luxury experience. Located on the chic Athens Riviera, the Hotel is a haven of sophisticated serenity, with three private coves and beaches tucked away on a pine-clad peninsula. The ideal escape from the bustle of the city, the Hotel is just 30 minutes from the capital’s UNESCO World Heritage Sites, with direct access by boat to neighbouring islands, encapsulating Greece’s beauty and history in a glittering seafront setting.