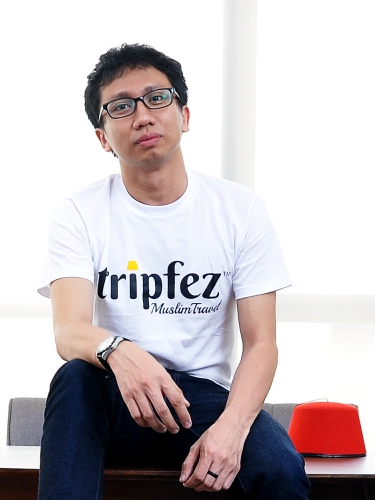 BANGKOK, 2017-Apr-05 — /Travel PR News/ — Faeez Fadhlillah, CEO and co-founder of the travel booking engine Tripfez, is today (March 30, 2017) named as the 2017 PATA Face of the Future. This is the most prestigious honour open to young tourism professionals in the Asia Pacific region.

PATA CEO Dr Mario Hardy said, “I congratulate Faeez on winning the 2017 PATA Face of the Future award. The judges were very impressed with his clear commitment to the responsible development of travel and tourism in the Asia Pacific region.”

Faeez receives a complimentary round-trip air ticket and hotel accommodation to speak at the PATA Annual Summit 2017 on May 19 when he will share his thoughts on the opportunities and challenges for young tourism professionals. He will also be invited to join the 2017/2018 PATA Executive Board as a non-voting member and observer.

“I feel so honoured and humbled to have been recognised with the prestigious PATA Face of the future award. This award is recognition for my co-founder Juergen Gallistl and the amazing team at Tripfez & Salam Standard who have put in tremendous effort in promoting the concept of inclusive travel focusing on localisation of our travel products for Muslim travellers. Muslim travel is the fastest growing segment in travel and contributes more than $138 billion to the global GDP. It created more than 4 million jobs worldwide based on the Salam Standard Global Economic Impact of Muslim Tourism 2015/2016,” he said.

“Travel and tourism is one of the main pillars that contribute to positive peace as defined by Johan Galtung and one of the UN Sustainable Development Goals, particularly through the concept of inclusive travel as put forth by Tripfez & Salam Standard. I look forward to working together with PATA, National Tourism Organisations, Associations, hotels and other travel industry stakeholders to further promote the concept of inclusive travel – with Muslim travel as an integral part – and move towards culturally localised travel experiences.”

Faeez Fadhlillah is the CEO and co-founder of Tripfez, an innovative, state-of-the-art travel portal dedicated to the rise of global Muslim travelers. Named as one of ‘Forty Individuals Who Shaped Southeast Asian E-Commerce’, by EcommerceIQ, Faeez also speaks at international travel conferences and seminars. He currently chairs the R&D committee of the Malaysian Association of Tour & Travel Agents (MATTA). Faeez was elected as Vice President of MATTA, Malaysia’s largest travel association for the term 2015-2017. Heading the brand of Tripfez and Salam Standard, Faeez advocates the concept of localising the travel experience through information, enabling travellers to make informed decisions.

Faeez works very closely with various Destination Marketing Organisations to promote the concept of localisation of travel an inclusive travel experience. He graduated from the University of Sydney with first class honours from the School of Engineering.

What the judges said:

Ms Raini Hamdi, Senior Editor, TTG Asia Publishing said “The PATA Face of The Future candidates have one thing in common. They are all SO passionate about their jobs! This truly is good news for our industry – those who have nagging doubts about the quality, drive and the sincerity of young people today to shine in travel and tourism may put that skepticism to rest.  I feel privileged to be one of three judges of PATA Face of the Future this year.”

Mr NobuTaka Ishikure, PATA Life member said “It was quite difficult for us to choose the winner, as all candidates are already young tourism leaders. I have no worry about our future in Pacific Asia tourism industry.”

Mr Willem Niemeijer, CEO, Yaana Ventures said: “It’s always refreshing and encouraging to see younger tourism professionals honored for their innovation, skills and vision. I hope the Face of the Future Award will motivate Faeez to follow his instincts and embrace even greater travel industry challenges in the years ahead.”