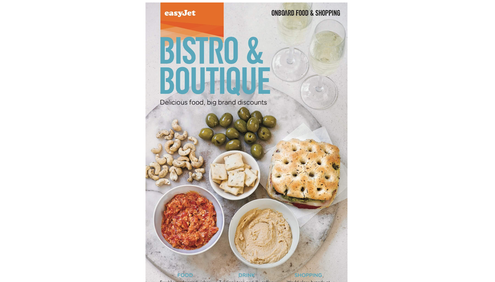 easyJet reveals passengers’ choice of buys onboard its flights

LONDON, 2016-Aug-12 — /Travel PR News/ — easyJet, Europe’s leading airline, has today revealed that sales of paprika Pringles onboard its flights have soared to new heights after a noticeable public figure was spotted devouring the snack onboard an easyJet flight last summer.

easyJet, Europe’s leading airline, has today revealed that sales of paprika Pringles onboard its flights have soared to new heights after a noticeable public figure was spotted devouring the snack onboard an easyJet flight last summer.

Since the trend-setter was papped last August, sales of paprika flavoured Pringles have been in their ‘prime’, with an increase of more than 30% this July compared with July 2015.

“After hitting the headlines and having its five minutes of fame last summer, sales of paprika Pringles onboard our flights have gone through the sky. Our passengers seem to have jumped on the trend and are wanting to tuck into a tube whilst flying to their destination.”

“It’s great to hear that people have been snapping up our delicious Paprika flavour on board and relaxing with a can after take off. We love getting ringing endorsements from all Pringles fans as whether you’re a popstar, politician or average Joe, no-one can resist a good Pringle when they’re peckish.”

Additionally, in a thorough analysis of all sales onboard its flights from its Bistro and Boutique menu between October 2015 to June 2016, the airline found some surprising – and some perhaps not so surprising – trends.

Contrary to popular belief, the bacon butty is not always the Englishman’s go-to sarnie. In fact, passengers on flights out of the UK were more likely to devour easyJet’s cheese and ham croque monsieur than the classic bacon roll.

The croque monsieur rated highly with our French neighbours too, with almost three times more passengers flying out of France purchasing the toastie than the bacon baguette. Nevertheless, the airline sold enough bacon butties between October and June to go up and down the Eifel tower 300 times.

The best Cabin Brew in the industry

Confirming the long-debated stereotype, Britons really can’t resist a good cuppa, with sales of Twinings English Breakfast tea around 9% higher in the UK than anywhere else in Europe – and more popular with passengers in the North of the UK than the South.

There has been a clear increase in sales of fruit, herbal and green teas following the rise of the healthy eating craze that has swept across the UK recently. Sales have increased year on year, with 14% more sales this July alone compared to last July.

Sales of illy coffee – a fairly new brand on easyJet’s menu since the end of last year – were also highest amongst Brits than any other country.

When it comes to sweet treats, the nation takes the biscuit with a whopping 11% more sales of confectionary in the UK than the rest of Europe. Snacks on offer include muffins, House of Edinburgh shortbread, KitKat, Twix, Maltesers and M&M’s. The airline has also recently introduced melt-in-the-middle cookies from Michel et Augustin and continues to sell by popular demand Joe&Sephs gourmet caramel double salted popcorn.

Mancunians come up smelling of roses

Manchester topped the chart for the ‘best smelling’ men and women in the UK, with sales of perfume and eau de toilette highest for passengers departing the airport than anywhere else. The Mancunians were closely followed by Southend, Newcastle and then Liverpool. Ladies and gents can take advantage of top brand fragrances with up to 50% off high street prices, including Marc Jacobs, YSL, Hugo Boss, Giorgio Armani and Paco Rabanne.

“We’re proud to be serving some of the best food, drink and boutique brands onboard our flights and, whilst we were surprised by some of the trends we found, we weren’t surprised by how popular our products are proving to be.

“We listen closely to what our passengers tell us they want, which is why we’ve introduced a number of great new additions to our menu. With a range of award-winning artisan food products, high-quality drinks and world-class shopping brands, there really is something for everyone.”
The analysis also found that:

easyJet’s Bistro and Boutique menu can be found here: http://buyonboard.easyjet.com