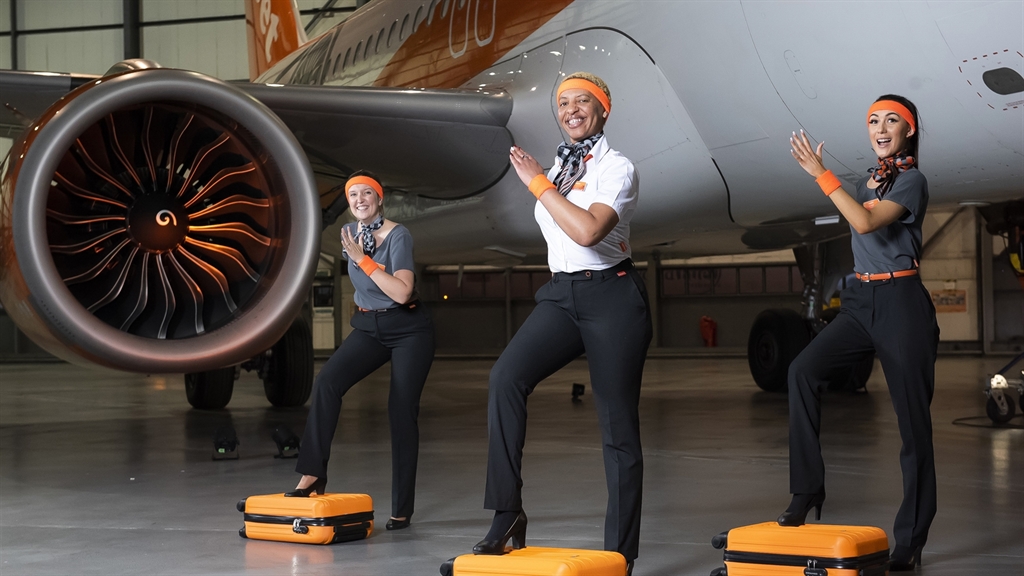 The new exercise plan is based on the daily routine of the cabin crew who really do get their 10,000 steps in each day. On average they clock up half a million steps a year on the job, or 700 miles – the equivalent to walking from London to Barcelona.

A series of free online exercise classes have been created, titled ‘Travel Bag Body Blast’, in which gym equipment and weights are swapped for cabin bag hand luggage.

You may also be interested in:  easyJet partners with AirPortr to give passengers the option to check their luggage in online and collected from their doorstep

Participants can expect to tackle flying-themed exercises such as ‘Landing Lunges’, ‘Cloud Climbers’, ‘The Pilot’s Press’, ‘Suitcase Squats’ and ‘38,000 feet’

A tongue-in-cheek promo film for the campaign has been revealed, starring easyJet cabin crew in orange sweatbands, as they display exercises such as side lunges whilst serving the onboard Bistro, squats whilst stowing suitcases and push-ups with pushchairs.

The ‘bag to basics’ exercise routine has been devised following new research by the airline which reveals 80% of Brits will make a New Year’s resolution to get fit. However, 61% admit they hate going to the gym and three-quarters (75%) admit are likely to give up their exercise regime by the end of January.

The new video will help people kickstart their new year’s fitness resolutions by showing them simple exercises they can enjoy in their own home, without the price-tag of new equipment or a gym membership.

The survey of 2,000 Brits aged 18 – 65 also reveals Brits, on average, admit to wasting £500+ on gym membership fees over their lifetime, signing up with good intentions but then quickly getting bored.

On average, Brits spend £99 every year on unused gym clothes, and while two in five spend money on monthly gym fees, only 65% of those only go once a month. A further quarter (27%) of us with gym memberships admit to not even going to the gym once.

Of those surveyed, 72% have bought gym equipment for the home, spending on average £278, with a third (34%) admitting that this equipment is gathering dust as it never gets used.

The ‘Travel Bag Body Blast’ workout from easyJet is available for FREE on YouTube https://youtu.be/Wrn2Ix7xpIQ

The exercise course was devised by cabin crew in consultation with professional Personal Trainer Aimee Corry.

You may also be interested in:  PANTANELLI DI VENDICARI a favore di un soggiorno perfetto

Each exercise in the routine is to be performed for 40 seconds with a 20 second rest, before moving on to the next one. Once a full circuit is complete, take 30 – 60 seconds rest before repeating. Performing 3 – 4 rounds of this circuit can burn up to 100 calories.

For Brits who plan to make a New Year’s resolution this year, the most popular resolution is to get fit and exercise more, followed by saving more money and taking up a new hobby or skill.

Brits’ Top Ten New Year’s Resolutions have been revealed as:

“Being cabin crew and looking after our customers while flying all over Europe is a fast-paced, dynamic job and so we all really enjoyed bringing that energy to these creative get-fit routines to help make getting active easy and enjoyable, all from your own home.”

“In the New Year when people are making resolutions for the year and planning their holidays to look forward to, we wanted to bring a bit of enjoyment to homes up and down the country with our easy and creative work-outs, fronted by our very own fantastic crew and inspired by their daily routine, to help the nation get ‘flying fit’ – and have fun while they do.”

The airline joined the UN-backed Race to Zero in November 2021 and has published its roadmap to net zero carbon emissions by 2050, with a focus on new technology and the ultimate ambition to achieve zero carbon emission flying across its entire fleet.  It also includes an interim carbon emissions intensity reduction target of 35% by 2035. Since 2000, the airline has already reduced its carbon emissions per passenger, per kilometre by one-third through continued fleet renewal, efficient operations and aiming to fill most of its seats.