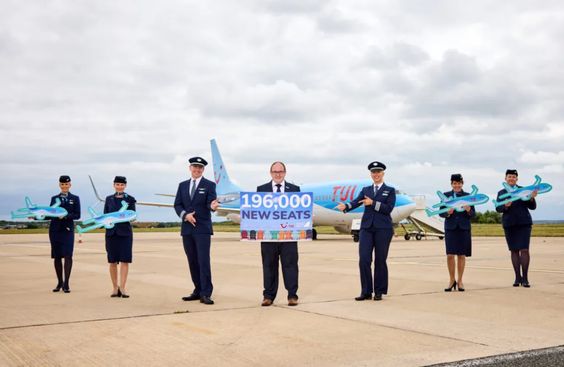 Yorkshire’s award-winning airport already holds the accolade for being one of the fastest growing airports in the UK. DSA has consistently grown over the past five years at a rate of 13%, treble that of other UK airports, demonstrating the plucky airport’s determination to buck the trend and rise to the current challenges affecting the aviation sector.

This expansion announcement from TUI means Summer 22 is set to be the biggest on record at DSA with passenger numbers set to grow to more than 1.7 million, potentially exceeding traffic levels of 2019 by more than 30%.

The TUI S22 schedule includes two new summer destinations to Faro (Portugal) and Hurghada (Egypt) and additional capacity of almost 200,000 seats to a host of popular holiday hotspots such as Palma and Malaga (Spain), Corfu, Crete and Kos (Greece).  The summer schedule also heralds the return of long-haul from DSA to Cancun (Mexico) and Melbourne, Orlando (Florida).

With 30 popular destinations available from DSA, both TUI and DSA are setting their sights on a bumper summer season for 2022 in anticipation of pent-up demand from holidaymakers desperate for a sunshine break, following a volatile 18-months for the aviation industry.

Kate Stow, Director of Aviation Development and Corporate Affairs, Doncaster Sheffield Airport, said: “We’re immensely proud of our long-standing relationship with TUI and its continued commitment to regional airports and this relationship has been fundamental to our growth story at DSA.  We’re already seeing strong demand from customers who haven’t had the chance for a summer getaway for over a year.  This impressive S22 schedule provides customers even more choice for a holiday in the sun with friends and family.

“As well as two new destinations, TUI have increased flights to 12 existing holiday destinations to cope with the appetite for foreign travel that we know is there and will kick-start as soon as international travel is well and truly opened up again.  We’re looking ahead to a record-breaking year and would advise customers to think about booking for Summer 2022 now.”