Los Angeles, Westlake Village, U.S.A., 2012-08-16 — /travelprnews.com/ — A new overnight package at Four Seasons Hotel Westlake Village, California invites guests to explore the legacy created by Walt Disney and the company that bears his name with the D23 Presents Treasures of the Walt Disney Archives exhibit at the Ronald Reagan Presidential Library & Museum. In addition to deluxe overnight accommodations, this package includes two tickets to the exhibit at the Library, just a short drive from the Hotel in scenic Simi Valley.

Exclusively for package guests of Four Seasons, the included exhibit tickets have no time restrictions. Package guests can visit any time during published exhibition hours to view the largest exhibit ever curated by the Walt Disney Archives. The exhibition features more than 500 artifacts from nearly nine decades of Disney history, more than half of which have never been seen by the public, including models, props, costumes, set pieces and artwork.

The original script written by Walt Disney for Mickey Mouse’s first cartoon, Steamboat Willie; a faithful recreation of Walt’s formal office from the Walt Disney Studios in Burbank, California.; the prop storybook that opened Sleeping Beauty; and Mary Poppins’ traveling costume (perfect for flying through the air) are just a few of the items from the archives currently on display. The exhibition also pays tribute to the long personal friendship and professional collaboration between Walt Disney and Ronald Reagan.

This package is available through April 30, 2013 and is based upon availability. May not be combined with other offers.

D23 Members can call the Hotel directly for a special exclusive offer. 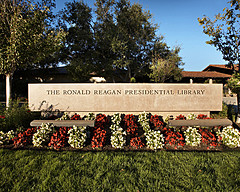