The prestigious award is named for Monsignor Ignatius McDermott, the co-founder of Haymarket Center, and known to his friends as “Father Mac.”

“Since assuming her position in 2009, Commissioner Andolino has been a friend of Haymarket and supporter of its mission, continuing the collaboration that has benefitted so many Chicagoans,” said Haymarket President and CEO Ray Soucek. “The O’Hare Outreach Program has helped thousands of men and women overcome the cycle of homelessness, addiction, and mental illness.”

Father Mac brought his own brand of sensibility, and, most of all, heart, to solving the unique dilemma of homeless individuals at O’Hare International Airport.

For decades, O’Hare had been a haven for hundreds of homeless, many of whom had substance use and mental health disorders. Because of the easy accessibility by public transportation, people seek refuge there because it’s open 24 hours a day, seven days a week, it’s safe, clean and in the winter, it’s warm.

In 1990, former Mayor Richard M. Daley reached out to Father Mac and asked for his assistance in addressing the situation due to his and Haymarket’s experience in helping the homeless.

“On behalf of Mayor Rahm Emanuel, I thank Haymarket Center for this honor, which I accept on behalf of our airline partners, the Chicago Police Department and all the men and women at the Chicago Department of Aviation who are the heart and soul of our city and the fabric of our community,” said Commissioner Andolino. “This award truly speaks to the heart of who we are at the CDA and the city of Chicago. We are public servants who tend to the needs of all of our residents.”

The annual award presentation program was held at Riva’s restaurant on Navy Pier in Chicago.

Haymarket, Chicago’s largest provider of addiction treatment services, launched a homeless outreach program at O’Hare aimed at establishing relationships with these homeless men and women and providing them with substance abuse and mental health treatment, among other services.

It operates five locations throughout Chicago and in Schaumburg and will celebrate its 25th Anniversary in 2015. For more information about Haymarket’s programs, click here. 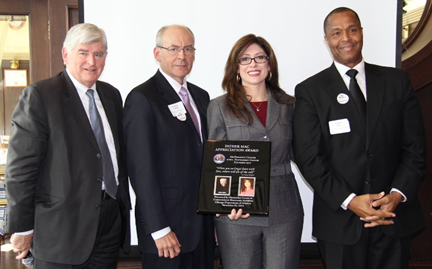