Brussels, Belgium, 2013-10-10 — /travelprnews.com/ — Carlson Rezidor Hotel Group, one of the world’s largest and most dynamic hotel groups, celebrated its 10th Responsible Business Action Month in September: The group’s hotels across Europe, the Middle East and Africa organized almost 700 activities and raised 107,000 EUR for Carlson Rezidor’s charity partner World Childhood Foundation. Childhood is an organization under the patronage of Queen Silvia of Sweden and focused on aiding children at risk for abuse and exploitation. Another 133,000 EUR were collected for a series of local charities in more than 260 communities in 70 countries.

“We have raised more funds than ever before – I want to thank each and everybody of our 35,000 employees who have participated in this years’ Responsible Business Action Month”, said Wolfgang M. Neumann, President & CEO at Rezidor. “We want to do sustainable business and support the hundreds of local communities we are living in – this is how we make a difference”, continued Neumann.

Carlson Rezidor also brought Responsible Business Action Month online: With the support of suppliers and business partners, an eBay auction for World Childhood Foundation sold hotel stays and exclusive products. In total 9,000 EUR were collected. And members of Club Carlson, the global loyalty programme of Carlson Rezidor, donated close to 2,300,000 points to World Childhood Foundation in conjunction with the campaign. The Carlson Family Foundation then matched the value of these donations. 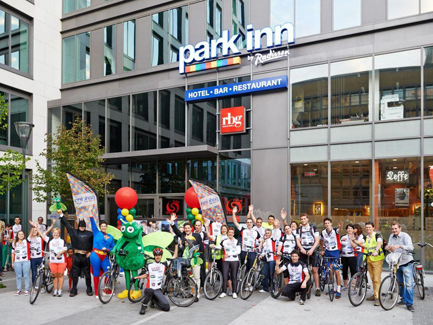