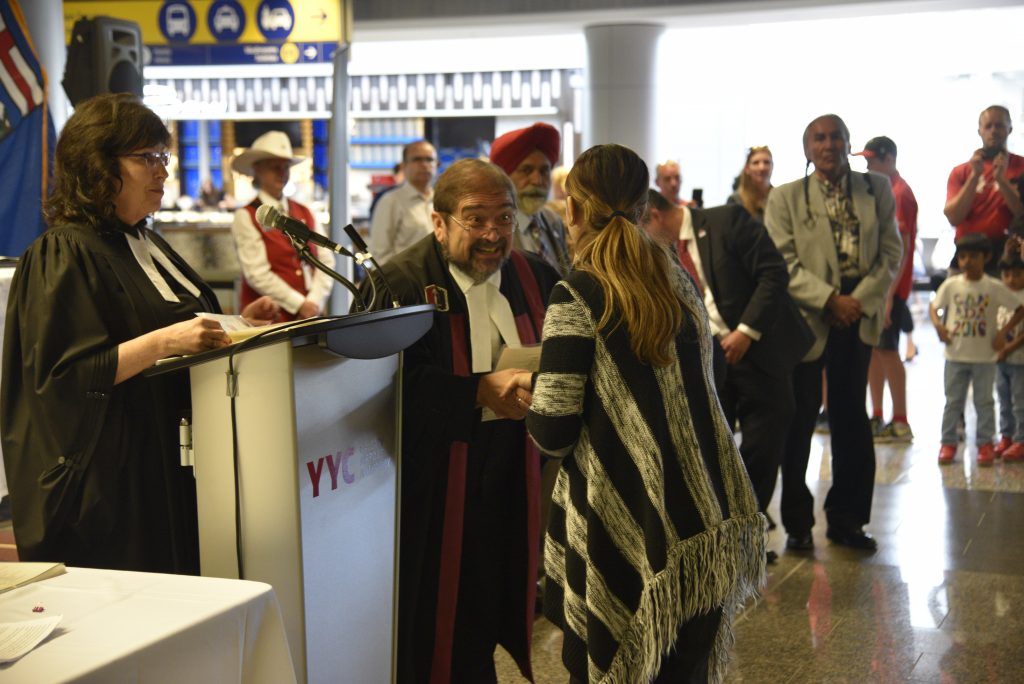 Calgary, Alberta, Canada, 2017-Jul-04 — /Travel PR News/ — On July 1, 2017, The Calgary Airport Authority partnered with Immigration, Refugees and Citizenship Canada to acknowledge Canada’s 150th anniversary by hosting it’s first-ever citizenship ceremony at YYC Calgary International Airport. In parallel with Canada’s 150th birthday, The Calgary Airport Authority is marking its 25 year-anniversary since it assumed the responsibility for the management, development and operations of YYC.

“As the airport is often the first place that people visit when entering Canada, it is fitting to host this ceremony here at YYC Calgary International Airport to mark this important occasion for each of these individuals, for The Calgary Airport Authority and for Canada” said Bob Sartor, President and CEO. “These new citizens have taken the Oath of Citizenship today in a place where world journeys begin and what is a known landmark location for immigrants making their entry into Canada.”

In addition to hosting the ceremony, the Authority commemorated its silver anniversary with the new citizens by providing gifts bags which included some unique Canadian souvenirs along with a one-of-a-kind handmade card featuring the maple leaf from a long-time White Hat Volunteer, Shannon Fahey.

ABOUT THE CALGARY AIRPORT AUTHORITY
The Calgary Airport Authority is a not-for-profit, non-share capital organization, incorporated under the Alberta Regional Airports Authorities Act, and is responsible for the safe, secure and efficient management of the YYC Calgary International Airport (YYC) and Springbank Airport (YBW) under long-term lease from the Government of Canada. YYC’s mandate is to advance economic and community development by providing improved airline and transportation services for the benefit of the public. The Authority has invested over $4 billion into the continued development of YYC, opening Canada’s longest runway in 2014 and a new International Terminal in 2016. YYC is a key economic driver for Calgary and Alberta, generating more than $8 billion in economic activity annually and creating 48,000 jobs.