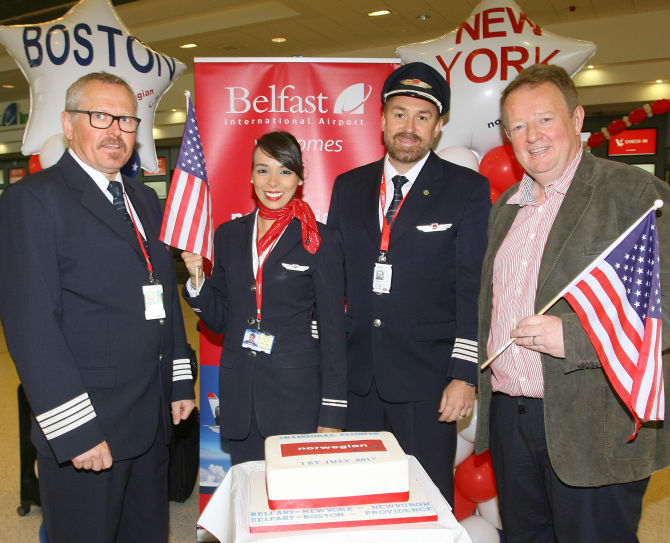 Airline launches only direct transatlantic flights to US East Coast

Earlier this year Norwegian announced the brand new transatlantic flights from Northern Ireland to smaller airports of Stewart International and Providence on the US east coast, which offer good access into the New York, Boston and New England areas but carry significantly lower landing charges, allowing Norwegian to offer some truly affordable fares.

Norwegian CEO Bjorn Kjos said: “We are delighted to launch Northern Ireland’s only direct route to the US East Coast. Travel should be affordable for all so these new transatlantic flights offer more choice and lower fares that will allow as many passengers as possible to fly. We also look forward to welcoming thousands of American travelers into Northern Ireland over the coming weeks, ensuring our new routes also offer a huge boost to Irish tourism, business and hospitality.”

Graham Keddie, Managing Director, Belfast International Airport: “This is a truly momentous day for Belfast International Airport. We are delighted to be launching two transatlantic services today to New York Stewart Airport and Providence Airport with Norwegian.
These routes restore the much needed New York link that United abandoned and also, for the first time ever, services into the Boston area. We are confident that both of these routes will be successful and we look forward to working with Norwegian to develop more services in the future.”

For passengers flying to Providence Airport, a range of road, rail and bus links make Boston just 90 minutes away, with key New England areas such as Cape Cod, Nantucket and Martha’s Vineyard also within reach. Full details on other tourist attractions served by the new routes are available here.

Norwegian customers flying from Belfast who are members of its free-to-join loyalty programme, Norwegian Reward, can earn and spend CashPoints and receive rewards after every sixth flight which can reduce the cost of all Norwegian flights.

Belfast – 5 transatlantic flights per week from £129 one way: