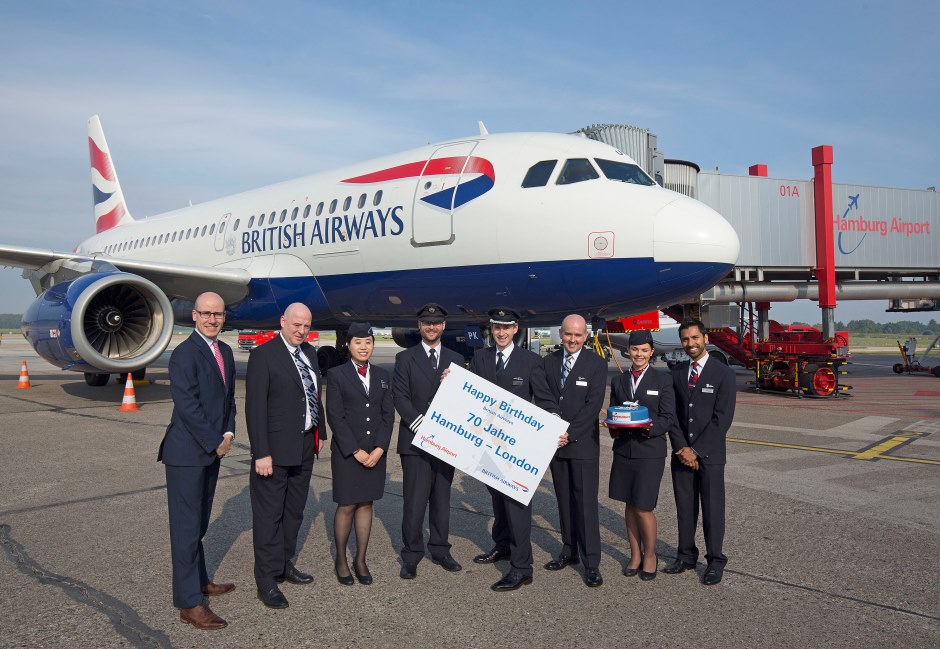 HAMBURG, GERMANY, 2016-Sep-06 — /Travel PR News/ — British Airways and Hamburg Airport are today celebrating the seventieth anniversary of the Hamburg-London route. Since 1 September, 1946, passengers from Hamburg and the whole of northern Germany have been able to fly with the premium airline to London every day. Today, there are several flights daily. British European Airways, the forerunner of British Airways, was one of the first airlines to resume civilian airline operations in Germany in 1946. The London-Amsterdam-Hamburg-Berlin route was served twice daily with a Vickers Viking propeller aircraft. British Airways currently offers up to 52 flights from Hamburg to London every week – 35 to Heathrow Airport and 17 to the centrally located London City Airport. Most of the premium airline’s flights to Heathrow are operated with Airbus A319 and A320 aircraft. Saab 2000 aircraft will be deployed on the Hamburg-London City route starting in September.

Both of the routes to the city on the Thames are served with a two-class configuration: passengers can choose between Euro Traveller, the British Airways short-haul economy class, and Club Europe, the airline’s short-haul business class. “British Airways has long been an established player in Hamburg. We were amongst the first airlines to resume civilian airline operations in Germany in 1946. It gives us great pleasure to celebrate a major round-number birthday at Hamburg Airport today,” said Katja Selle, British Airways’ Regional Commercial Manager Central and East Europe, at the seventieth anniversary celebration for the route. Michael Eggenschwiler, CEO of Hamburg Airport, added, “British Airways has been a reliable partner for Hamburg Airport for 70 years now. We are delighted by the great success and the continuity of this partnership. With five daily flights to London Heathrow and up to three daily flights to London City now being operated, British Airways offers our passengers a broad range of connections to London, an important commercial centre, and a vast array of connecting services all over the world.”

About British Airways
British Airways currently offers up to 314 flights from Germany to London each week, and the same number of return flights from London to Germany. British Airways flies to 199 destinations around the world. Within Germany, British Airways serves seven airports: Berlin-Tegel, Düsseldorf, Frankfurt, Hamburg, Hanover, Munich und Stuttgart. The British Airways Terminal 5 at London Heathrow was crowned “ The World’s Best Airport Terminal” by Skytrax in 2015 – for the fourth year in a row. IAG (International Airlines Group) is the stock-exchange-listed holding company of
British Airways, Iberia, Vueling and Aer Lingus.

Passengers can choose from more than 210 destinations in the USA that are served by the airline alliance on North Atlantic routes. The alliance consists of four major airlines: British Airways, American Airlines, Iberia and Finnair.

A wide range of carefully selected hotels, hire car providers and attractions at many destinations around the world can be booked together with flights at ba.com/holidays. Business travellers can benefit from the OnBusiness loyalty programme, which allows companies to jointly collect and redeem points on British Airways, Iberia and American Airlines. British Airways is creating one success after another with innovations including the introduction of electronic baggage tags, an app especially developed for the Apple Watch, the use of iPads on board, and the completely flat bed in Club World, the British Airways long-haul business class.
Further information is available at ba.com.