“I am excited by the economic promise that this new cargo center holds for the City of Chicago,” said Mayor Emanuel. “This project will create thousands of jobs for Chicagoans, expand O’Hare’s cargo operation capabilities, and will continue to move Chicago forward as a global transportation center and a City with an airport that has the most connections in the world.”

Announced in May 2012, the project will improve airport infrastructure, promote growth, enhance competitiveness, create thousands of construction and permanent jobs, and increase revenues. It will provide more than 1,200 construction jobs and over 1,200 permanent jobs during the three phases of development. An additional, 10,000 regional jobs are also expected to be in place upon completion.

“Cargo is a significant component of operations at O’Hare, keeping it competitive in the global marketplace both now and into the future. The new cargo center continues to promote the growth of Chicago and O’Hare International Airport as an international air freight hub,” said Commissioner Andolino. “The City of Chicago’s efforts and focus to strengthen the capacity and efficiency of O’Hare’s airport cargo operations will have lasting benefits.”

The new cargo center is expected to generate approximately $600 million to the airport, which includes $400 million in rental income over the life of the lease. The facilities will be leased to industry leading airlines, cargo handling organizations and other airport stakeholders. The new cargo center will increase capacity by 50 percent for jumbo jet freighters at O’Hare. This project will be completed at no cost to Chicago taxpayers and will incorporate environmentally-friendly elements including LEED certification and green roof space.

Located on the northeast side of O’Hare International Airport on approximately 65 acres of undeveloped property, the Northeast Cargo Center will be built in three phases. The first phase will include the construction of a building with cargo and office space and a new taxiway connecting the development with the rest of the airport. The following phases will include construction of additional buildings with cargo and office space.

When all three phases of this project are complete, the Northeast Cargo Center will be the largest airside cargo development built in the last decade at a U.S. international gateway airport. Chicago is the leading national gateway for air exports to China, representing more than 25 percent of the entire market.​ 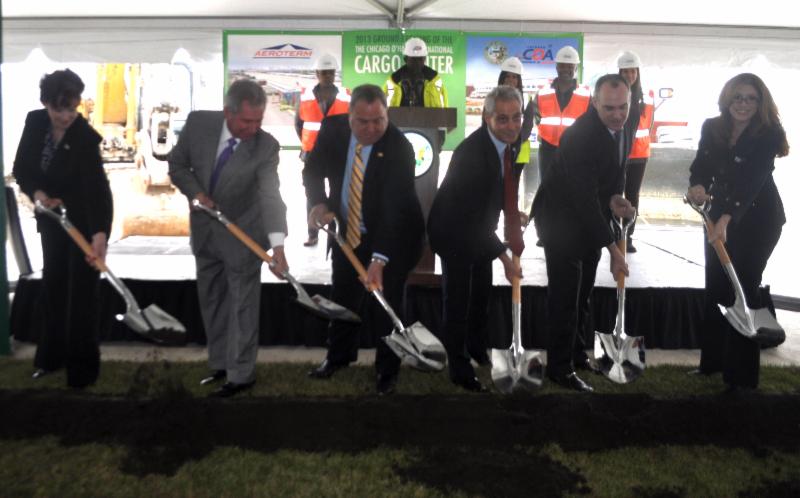