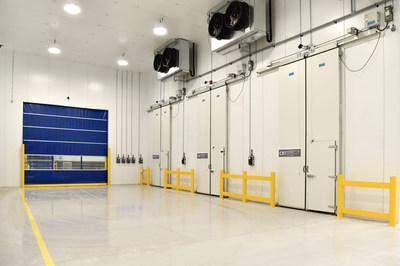 “This is an exciting day for Air Canada Cargo as we take another step forward in our evolution. The enhanced temperature-controlled facility is the only one of its kind for a Canadian airline and positions Air Canada Cargo to continue successfully growing our business, including the launch of our dedicated freighter aircraft. This investment, and the others that are to follow, will allow us to better serve our customers and I am very excited for what the future holds for Air Canada Cargo,” said Jason Berry, Vice President, Cargo, at Air Canada.

The upgraded facility will feature over 30,000 square feet of temperature-controlled areas and an expanded cooler to fully meet the requirements of cold chain shipments, such as pharmaceuticals, fresh food and other perishables. These enhancements are the first step in a multi-year investment plan for the facility and are part of several planned infrastructure investment projects for Air Canada Cargo.

To contribute to Air Canada’s long-term net zero emissions goal, the renovations included the installation of energy efficient equipment such as temperature controllers that will constantly monitor the conditions inside the facility and only regulate the temperature as needed, resulting in reduced energy consumption. As well, rapid roll-up doors have been installed to minimize the energy loss when the cooler is accessed to store or retrieve goods. LED lighting has been installed throughout the facility, further reducing energy consumption.

Air Canada is Canada’s largest domestic and international airline, the country’s flag carrier and a founding member of Star Alliance, the world’s most comprehensive air transportation network. Air Canada is the only international network carrier in North America to receive a Four-Star ranking from the independent U.K. research firm Skytrax, which in 2021 also named Air Canada as having the Best Airline Staff in North America, Best Airline Staff in Canada, Best Business Class Lounge in North America, as well as an Excellence award for its handling of COVID-19. Also in 2021, Air Canada was named Global Traveler’s Best Airline in North America for the third straight year. In January 2021, Air Canada received APEX’s Diamond Status Certification for the Air Canada CleanCare+ biosafety program for managing COVID-19, the only airline in Canada to attain the highest APEX ranking. Air Canada has also committed to a net zero emissions goal from all global operations by 2050. For more information, please visit: aircanada.com/media, follow Air Canada on Twitter and LinkedIn, and join Air Canada on Facebook.