Maldives, 2013-10-15 — /travelprnews.com/ — Air Asia X has started its operation to Maldives with its A330-300 aircraft landing at Ibrahim Nasir International Airport on 28th September 2013. AirAsia X is the affiliated long haul unit of the leading and the largest low-cost carrier, AirAsia.

Speaking at the inaugural ceremony, Mr. Bandhu Ibrahim Saleem thanked AirAsia team for their effort in adding Maldives to the airline’s vast network, connecting Maldives to Malaysia and beyond.

In the speech given by the Tourism Minister Adeeb highlighted on Maldives’ target to reach 1 million tourists within the year and how airlines play the key role in increasing the numbers to a destination. “Airlines are the most important component for any tourist destination. We welcome more airlines to fly into Maldives bring in more traffic which at the end will help to fill up the bed capacity we have and give confident to build more beds in the coming years” Minister stated.

In the remarks given by the Minister of Defence and National Security, Colonel (Rtd) Mohamed Nazim said that initiating the AirAsia service between Malaysia and Maldives opens vital links between two countries, opens various opportunities in further enhancement in travel and commerce sector.

CEO of AirAsia X, Mr. Azran Osman-Rani mentioned that it was thrilling to be able to start operation to Maldives after the initial discussion held 5 years back. Maldives is an inspirational destination and for many, coming to Maldives is a dream come true. “AirAsia currently flies direct to 10 cities in China, also connects Korea, Australia, Japan and all South East Asian countries, which gives us confident to access many from these markets to the sunny side of life” he stated.

In the speech by the Ambassador of the People’s Republic of China stated that most of the passengers of AirAsia come from China and China being the number one market for the Maldives with 28.4% market share, AirAsia X service to Maldives will further facilitate the numbers to increase. “Booming Chinese arrivals not only benefit tourism industry but also aviation industry”, he added.

The start off new airline services to the Maldives will certainly boost the arrivals to the country. With a well established network like AirAsia, Maldives will be more accessible for the travellers travelling from not only Malaysia but also from the Asia Pacific region. 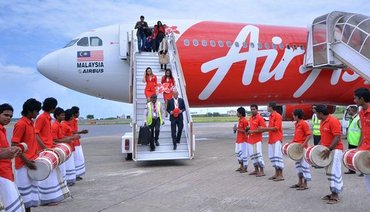