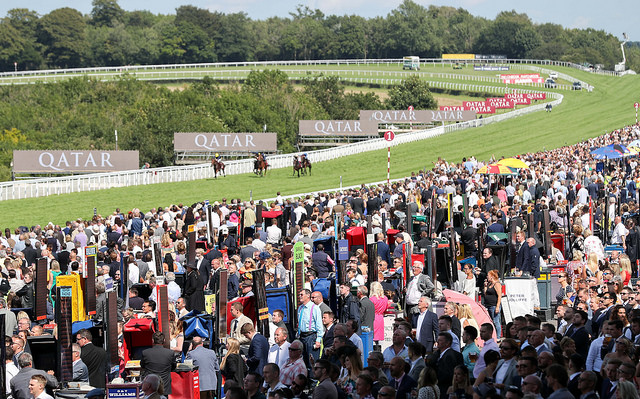 DOHA, Qatar, 2017-Aug-10 — /Travel PR News/ — More than 100,000 horse-racing devotees attended the prestigious 2017 Qatar Goodwood Festival during the course of the five-day event, helping maintain its reputation as one of the major sporting highlights of the ‘British Summer Season’.

Despite some wet weather, a sell-out crowd of more than 25,000 race-goers watched on the last day as top jockeys and their horses competed in one of the highlights of the UK’s flat racing season.

“The UK is a very important market for us, so our association with The Qatar Goodwood Festival is always an excellent opportunity to engage with our premium customers and showcase Qatar Airways’ five-star products and services including our First Class seat, available on our A380 service between Doha and Heathrow.”

Nasser Sherida Al Kaabi, General Manager of Qatar Racing and Equestrian Club, said: “The success of The Qatar Goodwood Festival is always helped enormously by the partnership of Qatar Airways, which helps raise the profile of this magnificent event. We look forward to extending our partnership with Qatar Airways to ensure the airline becomes a firm fixture in the years to come.”

Adam Waterworth, the Goodwood Estate Sports Managing Director, said: “The partnership between Qatar Airways and the Qatar Racing and Equestrian Club makes The Qatar Goodwood Festival a firm-favourite with race-goers. And despite some inclement weather the sun came out on the last day and the meeting finished on a real high. That’s what Goodwood is all about – great racing, great weather, and a fantastic atmosphere.”

The world-class field included two Qatari front-runners which took part in the Qatar Sussex Stakes, where a £1 million pot of prize money was on hand for the lucky winners.

World-famous jockey Frankie Dettori was riding Al Jazi, which was the winner of the L’Ormarins Queens Plate Oak Tree Stakes. Al Jazi is owned by Al Shaqab and trained by Francois Rohaut.

It was also a photo-finish at the Qatar Airways competition to find the best hat worn on Ladies’ Day. Leading style influencer Hermione Olivia chose an off-white hat adorned with lilies for its elegant simplicity, and its lucky owner won of a pair of return Business Class tickets from the UK to Doha, plus five-star hotel accommodation provided by the Qatar Racing and Equestrian Club. Entrants competed on Instagram using the hashtag #QatarAirways.

As well as offering a choice of 72 non-stop flights per week from London Heathrow, Manchester, Birmingham and Edinburgh to Doha and onwards to a network of more than 150 destinations worldwide, Qatar Airways will also start flying to Cardiff next year. The airline is launching 26 exciting new destinations around the world between now and the end of 2018, including; Chiang Mai, Thailand; Rio de Janeiro, Brazil; San Francisco, U.S.; and Santiago, Chile.

About Qatar Airways
Qatar Airways, the national carrier of the State of Qatar, is celebrating 20 years of Going Places Together with travellers across its more than 150 business and leisure destinations. The world’s fast growing airline will add a number of exciting new destinations to its growing network in 2017/18, including Dublin, Nice, Skopje, Sarajevo and many more, flying passengers on board its modern fleet of 200 aircraft.