Wydea Winters Travels to Greensboro, N.C., for the Presentation of a Brand New 2013 Cadillac XTS

Orlando, Fla., United States, 2013-10-21— /travelprnews.com/ — Wyndham Vacation Ownership (WVO), the world’s largest vacation ownership company and a member of the Wyndham Worldwide family of companies (NYSE:WYN), awarded a brand new luxury car to Wydea Winters during the third drawing in the Company’s Accelerate into the Fast Lane Sweepstakes. In an event that took place during the Wyndham Championship, an official PGA TOUR event at Sedgefield Country Club, company executives presented Wydea, of Charlotte, N.C., with a 2013 Cadillac XTS.

“I never win anything,” said Wydea Winters. “I definitely never thought I would win a car. It’s been surreal winning this sweepstakes.”

Wydea has been a CLUB WYNDHAM® owner since 2003 and travels most frequently to Myrtle Beach, S.C., with her ownership. In June 2013, during a stay at Wyndham Ocean Boulevard celebrating her birthday, Wydea was entered into the sweepstakes for a chance to win the luxury car. In July, her name was randomly drawn from more than 86,000 entries.

“I’m excited to award Wydea with such a fantastic prize. With Cadillac as the official vehicle sponsor of the Wyndham Championship, we knew it would be fun to bring her to the tournament and showcase all the Championship has to offer and also present her with this brand new, stunning Cadillac XTS,” said Jeff Myers, Wyndham Vacation Ownership’s chief sales & marketing officer.

As a part of its Accelerate into the Fast Lane Sweepstakes, the Company is giving away one luxury car, worth up to $50,000, every other month throughout 2013. Owners and guests are automatically entered in the sweepstakes when they attend a sales presentation or owner update at a participating resort. Previous winners of the sweepstakes were George and Judy Maykowskyj of Colbert, Wash.; and Chris and Melissa Todd of Humboldt, Tenn. Please view the Official Rules for entry details. Find out more by visiting http://www.wyndhamsweeps.com/accelerate. 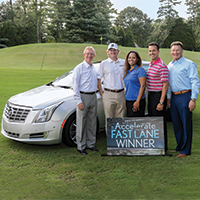