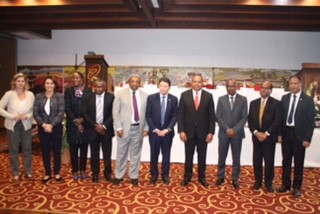 Madrid, Spain, 2017-Nov-05 — /Travel PR News/ — The Secretary-General of the World Tourism Organization (UNWTO), Taleb Rifai has visited Madagascar to express the Organization’s full support to the tourism sector. Madagascar’s tourism is facing a challenging situation following a plague outbreak which has prompted some countries to implement travel restrictions with Madagascar. Mr Rifai recalled the World Health Organization (WHO) advises no restriction on travel or trade on Madagascar.

“UNWTO is echoing the advice by WHO to governments not to rush to issue inaccurate travel advisories. The WHO Key Messages updates dated 26 October recalls that the risk of international spread appears unlikely. WHO advises no restriction on travel or trade on Madagascar based on the current available information“ said Mr Rifai.

“We can not penalise a country twice – once by the country being hit and having to confront and pay the direct heavy price of a devastating crisis and second by us, human community, falling into misguided perceptions and, as a result , shunning and isolating the victim country and adding to the problem rather than to the solution” he added.

WHO recalls that it is important to strike a balance between encouraging countries in the region to be ready to act in case of an outbreak, while avoiding panic that could result in unnecessary or counterproductive measures such as trade restrictions or travel bans on affected countries.

“We are facing a perception crisis. Clear and factual communication on the real situation in Madagascar is crucial to prevent damaging advisories from adding gravity to the crisis” said Rifai.

Meeting with the Minister of Tourism, members of government, the President of the National Assembly, representatives from the United Nations in Madagascar, including the WHO Resident Coordinator, the World Bank, local private sector and media, Mr Rifai recalled that  “positive news are coming out of the sector such as the new strategic partnership between Air Madagascar and Air Austral. We need to communicate the good news; build our capacity and restore confidence”.

The Minister of Tourism Roland Ratsiraka recalled “Being an island with 80% endemic biodiversity, Madagascar has a natural calling for sustainable tourism” said the Minister of Tourism. “Mr. Secretary General, your visit is rich in meaning, gives hope to a whole people and those who still doubt the economic benefits of the tourism industry” he added.

“Collaboration among all countries in crisis situations is critical and we call upon all countries in the region to cooperate in a way that reinforces prevention without creating unnecessary travel bans” said the Najib Balala, Chair of the UNWTO Commission for Africa and Minister of Tourism of Kenya.

UNWTO Secretary-General and the Minister of Tourism of Madagascar will be meeting the press next week at the World Travel Market in London to brief on the current situation in the country.