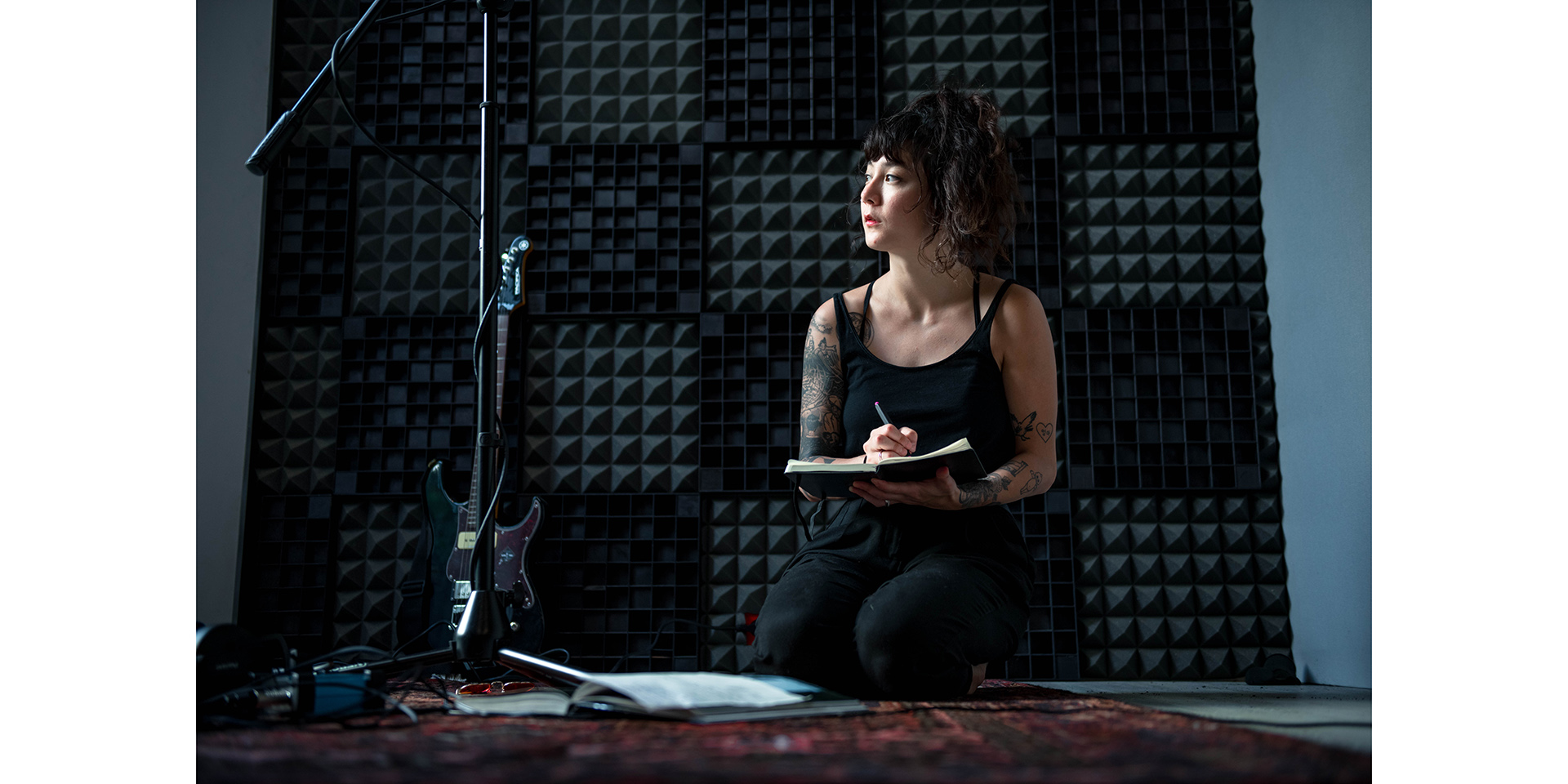 “I was originally going to record a different song but decided to write something on the fly once I arrived in Bali,” said Zauner. “I like the challenge of writing and arranging quickly and intuitively sometimes, and I had just bought a native instruments maschine and wanted to explore a lot of the sample libraries it came with and work on the synths that were at the studio. It was a very idyllic place to work,” Zauner said of the W Sound Suite at W Bali. “I usually record in cold studios, so Bali was a pretty glamorous change. I felt so lucky the day I arrived just walking around the hotel.”

W Records will be reaching beyond music to support a cause that’s important to both W Hotels and the artist. All W Hotels proceeds from the streaming of both Japanese Breakfast tracks will go to a charity of her choosing, which will be announced soon.

With the release of her sophomore album Soft Sounds From Another Planet, Japanese Breakfast’s Michelle Zauner expanded the breadth of the shimmering bedroom pop displayed on her debut Psychopomp. Her voice and vision came clearer into focus as she used the extended metaphor of outer space to observe the pain that defined the first part of her career. Full of gleaming guitars and haunting electronics, “Soft Sounds” earned critical acclaim and new fans around the world, quickly making Japanese Breakfast a household name among the indie rock contingent.

“Working with Japanese Breakfast on this song has really illustrated the goal of our music program – supporting an incredible musician from concept to final product, from recording at W Bali to getting this stunning track out into the world today,” said Anthony Ingham, Global Brand Leader, W Hotels Worldwide. “W Records was conceived to inspire musicians to do what they do best – get creative. It’s been amazing to see Japanese Breakfast write, record, produce and explore with us at W. It was (and continues to be) an inspiring journey with her and each of our W Records artists. We’re ready for the world to hear what we’ve been working on.”

Much of 2018 saw Zauner on the road, further honing her live show and performing for massive audiences. All the while, she kept busy—not only as Japanese Breakfast, but as Michelle Zauner: video game composer, prolific music video director, and author. Fans eager for new music from Zauner were pleasantly surprised in summer 2018, when she revealed “Glider” in the E3 announcement trailer for the breathtaking new adventure video game Sable. Drawing from her years of songwriting experience while making new explorations into creating ambient and experimental music, she composed the entire soundtrack for the highly-anticipated indie game, which is due out early 2020. Zauner is also well underway making a name for herself as a sought-after director, working with longtime collaborator Adam Kolodny to craft music videos for other artists such as Phoebe Bridgers and Conor Oberst, Jay Som and Charly Bliss.  Between tours, studio sessions, and video shoots, Zauner has long been working on a memoir of her early childhood, time spent between the U.S. and South Korea, and the split heritage that has shaped so much of her life. An excerpt from that book, “Crying in H-Mart,” was published in The New Yorker at the end of 2018. The full book, also titled Crying in H-Mart, will be released via Knopf. With this track release, Zauner adds yet another exciting update to her ever-growing resume of creative projects as the last W Records artist to join the label in its debut year.

Listen to these W Records Releases:

Amber Mark – “High On Your Love”

Perfume Genius – “Not For Me”

W Records is a record label and resource for artists selected by W Hotels and their music industry partners. From recording to release, W Records supports artists through every step of development, providing recording space, mixing and mastering and finally, distribution of the new sound via live performances, streaming and vinyl production. Tracks for W Records are recorded, naturally, in W Sound Suites (the brand’s signature, on-site recording studios) with four rising artists stepping up to the mic within the first year. Tracks from each artist will be released through W Records both digitally and via limited edition runs of vinyl which will be gifted to tastemakers, DJs and W fans as a throwback way to enjoy new/next music.

W Records is supporting emerging artists, and artists on the tipping point of worldwide fame with production, distribution, and live performances. Each artist will lay down tracks in a W Sound Suite (either W Hollywood, W Barcelona, W Bali or W Seattle) and record a cover as well as an original track. Once the tracks are mixed and mastered, W will release 500 copies of limited-edition vinyl which will be sent to DJs, tastemakers as well as music-loving SPG/Marriott Rewards members.

The W brand’s long-standing relationships with music industry partners, promoters, media and influencers will help W Records artists cut through an overcrowded market. Artists will also get direct exposure to more than 120 million members of Marriott International’s loyalty programs, providing a huge audience from the start. W Records is in part overseen by Giant Step, the marketing agency that has created award-winning campaigns for brands like Intel, Samsung and ABSOLUT. Like W, Giant Step has a true passion for music and is a recognized brand within the industry having worked with many notable artists over the years including Amy Winehouse, Janelle Monae, Lady Gaga and Daft Punk. The W Records team and capabilities are similar to a small but powerful independent label. W Records is supported by both in-house and music-centric PR teams between THINK PR (W brand) and Grandstand Media, non-commercial radio promotion from co-sign, plus Giant Step’s marketing team adding DJ, tastemaker and influencer marketing to the program’s scope. Global distribution is provided by AWAL (Tom Misch, 3LAU) which connects W Records with audiences through top streaming services including Spotify, Apple Music, iTunes, Amazon, Google Play, and Deezer. This combination of a nimble label team with the marketing power of W Hotels and Marriott International creates a unique and exciting prospect for the artists working with W Records to amplify their sound on a global scale.

Stay tuned for the next artist announcement from W Records. In the meantime, please visit W Hotels online to learn more about W and music, and follow along on social @WHotels. To book your own recording session at a W Sound Suite, visit: W Bali, W Barcelona, W Hollywood, W Seattle.

Born from the bold attitude and 24/7 culture of New York City, W Hotels, part of Marriott International, Inc., has disrupted and redefined the hospitality scene for nearly two decades. Trailblazing its way around the globe, with over 50 hotels, W is defying expectations and breaking the norms of traditional luxury wherever the iconic W sign lands. With a mission to fuel guests’ lust for life, W ignites an obsessive desire to soak it in, live it up and hit repeat. The brand’s provocative design, iconic Whatever/Whenever service and buzzing Living Rooms create an experience that is often copied but never matched. Innovative, inspiring and infectious, the brand’s super-charged energy celebrates guests’ endless appetite to discover what’s new/next in each destination, to see more, feel more, go longer, stay later. For more information on W Hotels, visit whotels.com/theangle or follow us on Twitter, Instagram and Facebook. W Hotels Worldwide is proud to participate in Marriott Bonvoy, the new name of Marriott’s travel program replacing Marriott Rewards®, The Ritz- Carlton Rewards®, and Starwood Preferred Guest® (SPG). The program offers members an extraordinary portfolio of global brands, experiences on Marriott Bonvoy Moments and unparalleled benefits including earning points toward free hotel stays and nights toward Elite status recognition. To enroll for free or for more information about the program, visit MarriottBonvoy.marriott.com.