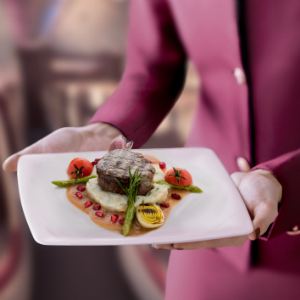 DOHA, Qatar, 2017-Oct-02 — /Travel PR News/ — Qatar Airways has been awarded ‘Best Cabin Service‘ and ‘Best Food and Beverage‘ at the 2017 APEX Passenger Choice Awards held during the annual APEX Expo. The airline also received the evening’s highest ranking as a 2018 five-star airline from over half a million passengers who took part in the highly influential awards.

The latest accolades were presented to the 2018 five-star global airline during the APEX EXPO Awards Ceremony in Long Beach, California, U.S.A.

Qatar Airways Group Chief Executive, His Excellency Mr. Akbar Al Baker, said: “We are delighted to win these two amazing awards, especially as they are voted for by the people we care about most – our passengers. It is their vote of confidence in us which spurs us on to continually enhance the customer experience for all of our passengers on all of our flights around the world.

“The awards, combined with being named Airline of the Year 2017 by SKYTRAX earlier this year, vindicate our continuing investment to ensure our award-winning five-star service is the best in the world and our passengers can enjoy unrivalled standards of cabin service with the best dining in the sky.”

Qatar Airways was the only airline at the prestigious event to win two out of the top five awards. The ceremony was hosted by Guy Brian Kelly of The Points Guy, a website which offers worldwide points, miles and travel related tips for frequent fliers.

These latest awards come just a month after Qatar Airways clinched the ‘Best Up In The Air Experience’ award for the third consecutive year and the ‘Best Baggage Initiative’ award at the Future Travel Experience Global 2017 awards ceremony, held in Las Vegas.

The award-winning airline has received a number of other major accolades this year, including Airline of the Year in the prestigious 2017 Skytrax World Airline Awards, which was held at the Paris Air Show. This is the fourth time that Qatar Airways has been given this global recognition. Qatar’s national carrier also won a raft of other major awards at the Skytrax ceremony, including Best Airline in the Middle East, World’s Best Business Class and World’s Best First Class Airline Lounge.

The latest awards come in tandem with a series of recent innovations announced by the airline to continually enhance the passenger experience. Last month it introduced a new premium global chauffeur service for passengers, offering door-to-door seamless transfers. Passengers have also been offered a new range of limited edition amenity kits from luxury luggage brands BRIC’S and Nappa Dori for those flying in First Class and Business Class. Meanwhile the airline’s award-winning in-flight entertainment system, Oryx One, recently announced it has dramatically increased the number of entertainment options available to a staggering 4,000, with even more top TV shows, blockbuster movies and music available to choose from.

There have also been continuing enhancements to the airline’s in-flight catering, with a new bespoke Pre-Select Dining service for its First and Business Class passengers, giving them even more choice and freedom to create a personalised à la carte dining experience every time they travel on long-haul flights from Doha. Qatari locally-smoked salmon has also been introduced as a fresh new ingredient for First and Business Class dining.

Earlier this year, Qatar Airways launched its groundbreaking new Business Class seat, Qsuite, featuring the industry’s first-ever double bed available in Business Class, with privacy panels that stow away, allowing passengers in adjoining seats to create their own private room. Adjustable panels and movable TV monitors on the centre four seats allow colleagues, friends or families travelling together to transform their space into a private suite, allowing them to work, dine and socialise together. These new features provide the ultimate customisable travel experience that enables passengers to create an environment that suits their own unique needs.

The 2017 APEX Passenger Choice Awards were collated using the TripIt app from Concur, the travel management experts, travellers rated more than 500,000 flights on a five-star scale, from October 2016 through July 2017. The ratings determined the winners of the Passenger Choice Awards, with four- and five-star-rated airlines rated in the categories of Global, Major Regional and Low-Cost airlines.

Qatar Airways operates a modern fleet of 200 aircraft to a network of more than 150 key business and leisure destinations across Europe, the Middle East, Africa, Asia Pacific, North America and South America. The airline is launching a host of exciting new destinations planned for the remainder of this year and 2018, including Canberra, Australia; Chiang Mai, Thailand and Cardiff, U.K, to name just a few.