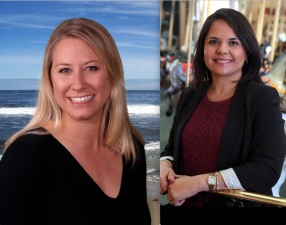 Santa Cruz, CA, 2022-Jan-31 — /Travel PR News/ — The Santa Cruz Beach Boardwalk announced today (January 24, 2022) the promotion of two key leaders within their organization. Jessica Alfaro has been promoted to Assistant General Manager/Director of Operations and Karley Pope has been promoted to Director of Marketing and Sales. Jessica and Karley both reside in Santa Cruz County and have been longtime leaders within the workplace and their communities.

Jessica was born in Santa Cruz and attended Santa Cruz High and Cabrillo College. She began her Boardwalk career in 1996 as a Game Operator. Jessica soon rose to a supervisor in the Operations Office and became Manager of Guest Services in 2011. In 2016 Jessica was named Director of Operations where she was responsible for the day-to-day operations of the Boardwalk, a variety of employee training programs and tasked with improving the guest and employee experience. Jessica has previously served on the Boys and Girls Club of Santa Cruz County Board of Directors. She has been married for 22 years to Bernardo Alfaro who also works at the Boardwalk. They have two children both of whom either currently or previously worked at the Boardwalk.

Karley was also born in Santa Cruz and attended Aptos High School and Cal Poly San Luis Obispo. Her Boardwalk career began in 2003 when she was hired as the Youth Sales Manager. Karley also served as the Promotions Director where she expanded the Boardwalk’s shoulder season business with a variety of special events. Prior to being promoted to the Director of Marketing and Sales Karley served as the Director of Sales. Karley previously served on the Big Brothers Big Sisters Board of Directors and currently serves on the board of Visit Santa Cruz County. Karley has been married for 20 years to Corey Pope who is a teacher at Gilroy Unified School District. They have two children who attend school in Aptos.

“Jessica and Karley are amazing members of our team,” said Santa Cruz Beach Boardwalk President Karl Rice. “They are both great leaders who always find new and creative ways to improve the Boardwalk experience for guests and employees. I’m proud to call them colleagues and thankful for their dedication to our company.”

About the Santa Cruz Beach Boardwalk: