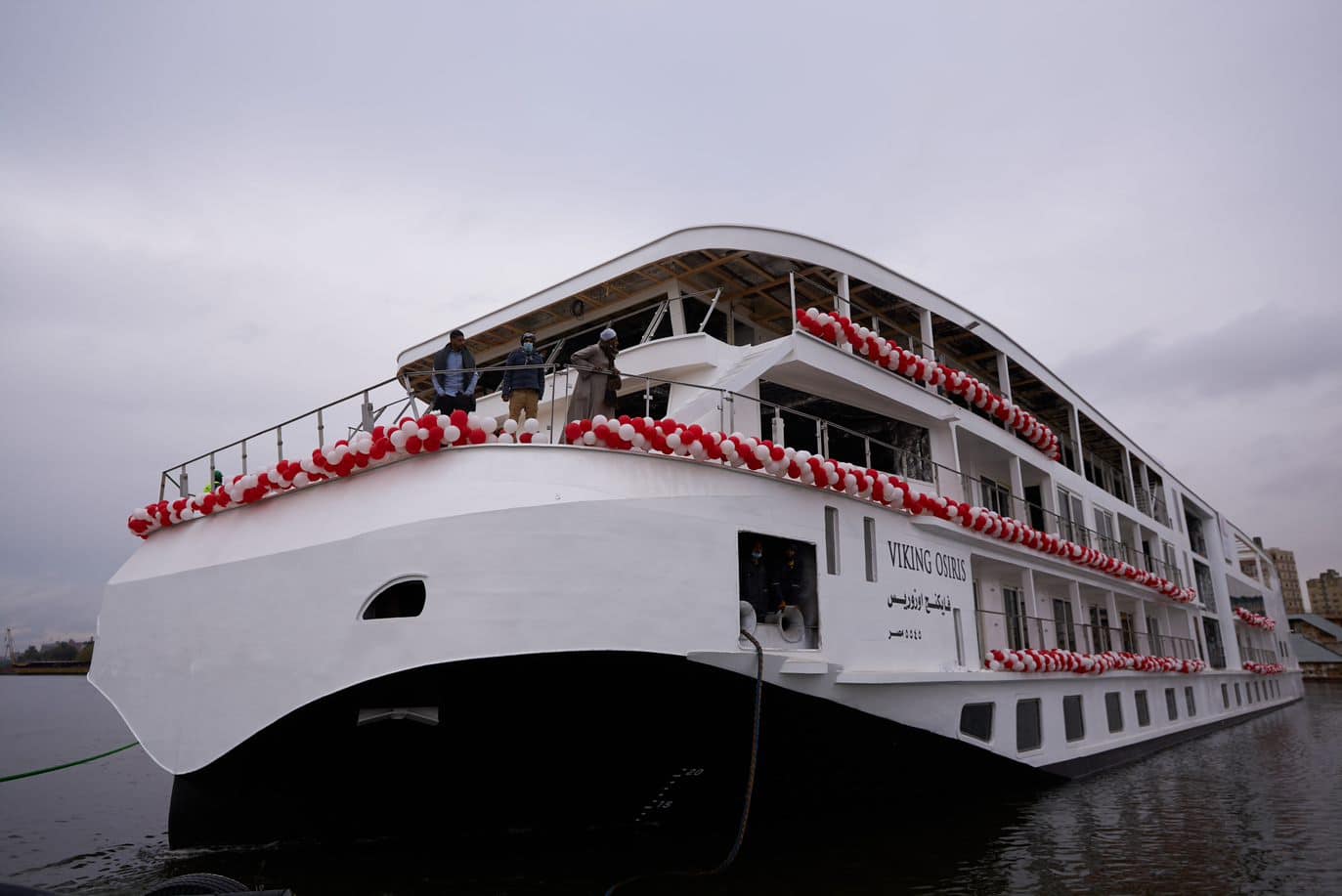 The 82-guest Viking Osiris, Viking’s newest ship for the Nile River, touched the water for the first time

Los Angeles, CA, 2022-Feb-01 — /Travel PR News/ — Viking® (www.viking.com) today (January 27, 2022) announced its newest ship for the Nile River—the 82-guest Viking Osiris—was “floated out,” marking a major construction milestone and the first time the ship has touched water. Set to debut in August 2022, Viking Osiris will sail Viking’s bestselling 12-day Pharaohs & Pyramids itinerary. The arrival of Viking’s new ship later this year coincides with several key events in Egypt in 2022, including the highly anticipated opening of the new Grand Egyptian Museum outside Cairo on the Giza Plateau—as well as the 100th anniversary of the discovery of King Tutankhamen’s tomb by Howard Carter and his benefactor, the 5th Earl of Carnarvon. Building on Viking’s longstanding relationship with the Carnarvon family, guests who sail on board Viking Osiris will experience Privileged Access® to memories from 1922 and the events surrounding the discovery of King Tutankhamen’s tomb.

“Our guests are curious explorers, and just as the iconic explorers before them, they choose Egypt as a destination because of its unparalleled access to history and antiquities. This rings as true today as it did a century ago and is what we continue to hear from the guests who are currently sailing with us on the Nile, as well as the many we have hosted in the last year,” said Torstein Hagen, Chairman of Viking. “We are proud to be the only western company to build, own and operate ships on the Nile—and we will always maintain our commitment to creating meaningful experiences that are focused on the destination. Particularly during this milestone year for Egypt, we look forward to welcoming guests on board Viking Osiris and introducing them to the country’s many cultural treasures.”

The traditional float out ceremony took place at Massara shipyard in Cairo yesterday, January 26, 2022, and is significant because it denotes a ship moving into its final stage of construction. The float out of Viking Osiris began at approximately 11:00 a.m. local time when a member of the Viking team pressed the button that signalled to lower the ship-lift of the yard, she will then be moved to a nearby outfitting dock for final construction and interior build-out.

Hosting 82 guests in 41 staterooms, the new, state-of-the-art Viking Osiris is inspired by Viking’s award-winning river and ocean ships with the elegant Scandinavian design for which Viking is known. The vessel features several aspects familiar to Viking guests, such as a distinctive square bow and an indoor/outdoor Aquavit Terrace. Viking Osiris will join the company’s other ship on the Nile, Viking Ra, which launched in 2018. Additionally, in response to strong demand, Viking Aton, an identical sister ship to Viking Osiris, will join the fleet in 2023.

During the 12-day, Pharaohs & Pyramids itinerary, guests begin with a three-night stay at a first-class hotel in Cairo, where they can visit iconic sites such as the Great Pyramids of Giza, the necropolis of Sakkara, the Mosque of Muhammad Ali, or beginning in late 2022, the new Grand Egyptian Museum. Guests then fly to Luxor, where they visit the Temples of Luxor and Karnak before boarding a Viking river ship for an eight-day roundtrip cruise on the Nile River, featuring Privileged Access to the tomb of Nefertari in the Valley of the Queens and the tomb of Tutankhamen in the Valley of the Kings, and excursions to the Temple of Khnum in Esna, the Dendera Temple complex in Qena, the temples at Abu Simbel and the High Dam in Aswan, and a visit to a colorful Nubian village, where guests can experience a traditional elementary school. Finally, the journey concludes with a flight back to Cairo for a final night in the ancient city.

For guests looking to extend their journey, Viking also offers Pre and Post Extensions that provide Privileged Access to archives and exhibits. Building on the success of the Oxford & Highclere Castle program – one of Viking’s highest-rated Pre/Post Extension that visits the filming location of “Downton Abbey”—the company has applied the same degree of Privileged Access to a curated Extension that allows guests to retrace the steps of Howard Carter and the 5th Earl of Carnarvon. Guests on the five-day British Collections of Ancient Egypt extension will begin the journey in London, where they will meet their Viking Tour Director, an expert Egyptologist, and experience Privileged Access to two museums: first a private, early morning visit to the Egyptian Collection at the British Museum before it opens to the general public – and then a visit to the home and personal museum of world-renowned architect, Sir John Soane, where the tour will be illuminated by candlelight, a re-enactment of how Soane entertained guests and showcased his exquisite collection of Egyptian antiquities, including a 3,000-year-old Egyptian sarcophagus. Guests will also visit London’s Petrie Museum, which houses more than 80,000 artifacts from ancient Egypt and Sudan. In Oxford, guests will visit the Ashmolean Museum, one of the oldest in the world, and home to a varied collection of Egyptian mummies and art—and go behind the scenes at Oxford University’s Griffith Institute, where they will enjoy a Privileged Access visit to see Carter’s archives, which detail the discovery of Tutankhamun’s tomb. Lastly, guests will have further Privileged Access with an exclusive visit to Highclere Castle—the country seat of the Earl and Countess of Carnarvon—to view the Earl’s magnificent private collection of Egyptian artifacts, as well as archives and exhibits not normally accessible to the public.

Additional offerings include a Pre Extension in Jerusalem where guests will explore the ancient history and vibrant culture of Israel’s fascinating capital and a Post Extension to Jordan – Petra, Dead Sea & Amman to view Roman antiquities at Jerash, Crusader-era castles at Kerak or Shobak and experience the lost city of Petra, a UNESCO World Heritage Site.

Guests who sail with Viking experience the company’s industry-leading health and safety program. Grounded in scientific research, the Viking Health & Safety Program was developed in partnership with an international team of medical advisors, including Raquel C. Bono, M.D., Viking’s Chief Health Officer. Dr. Bono is a board-certified trauma surgeon and retired Vice Admiral of the United States Navy Medical Corps—and in 2020, led Washington State’s medical and healthcare systems response to the COVID-19 pandemic. Viking requires all guests and crew to be up to date in their immunization against COVID-19 at least 14 days prior to travel. Furthermore, Viking is the first and only cruise line with full-scale PCR laboratories installed on board its ocean and expedition ships. Utilizing the PCR laboratories on board Viking ocean and expedition ships—and a strong network of dedicated shoreside labs for Viking river ships in Europe—all guests and crew receive up to daily quick and easy non-invasive saliva PCR tests. The easy access to robust PCR testing also simplifies guests’ travel experience with a final COVID-19 test taken onboard that satisfies the requirement for pre-flight testing before arrival into the U.S. New air purification technology has also been installed on all Viking ships, which have always featured independent air handling units for all guest staterooms. And additional health checks, sanitization and physical distancing measures provide further protection for Viking guests and crew at all points of the journey. A complete overview of the Viking Health & Safety Program can be found at: www.viking.com/health-safety.