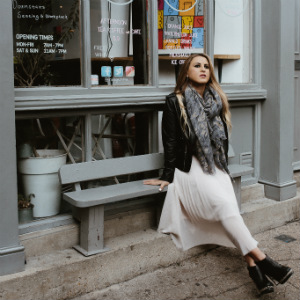 Her beautiful and uplifting musical work, entitled Sky, was created to relax and inspire passengers as they board the airline’s fleet of aircraft and set the mood and atmosphere for the rest of their journey.

Dana Al Fardan’s work blends rich strings, choral vocals and solos with traditional Middle Eastern rhythms. Her music, Sky, is now played on every aircraft as customers board and disembark, to make their flight a more personalised and meaningful experience.

“As a Qatari she is perfectly in tune with our culture and traditions, so we were delighted to be able to show our support for local talent and provide a global stage for this wonderful musician to an amazingly diverse worldwide audience, of every age and nationality.”

Ms. Al Fardan said: “It’s a tremendous honour to be able to reach such an incredible audience and to be able to represent my country and showcase modern, contemporary Qatari music through Qatar Airways. I hope my music helps bring people together through their shared experience of taking a journey together.”

As well as composing the music for Qatar Airways’ latest TV commercial, Ms. Al Fardan also composed The Beginning, the official theme song for Hamad International Airport (HIA). Her latest album, Sandstorm, is also featured on all Qatar Airways flights, and can be listened to through the airline’s award-winning in-flight entertainment system, Oryx One.

Ms. Al Fardan is the founder and CEO of DNA Records, Qatar’s first recording company. Her first critically-acclaimed album, Paint, was released in 2013. She believes culture and heritage cannot be separated from the artistic process. She also hopes that by becoming more involved with musicians from around the world, it will help establish a large-scale music festival in Qatar and lead to the growth of a serious music industry in the country.

Qatar Airways has received a number of major accolades this year, including Airline of the Year by the prestigious 2017 Skytrax World Airline Awards, which was held at the Paris Air Show. This is the fourth time that Qatar Airways has been given this global recognition as the world’s best airline.

As well as being voted Best Airline by travellers from around the world, Qatar’s national flag carrier also won a raft of other major awards at the ceremony, including Best Airline in the Middle East, World’s Best Business Class and World’s Best First Class Airline Lounge.

Qatar Airways also has a range of exciting new destinations planned for the remainder of this year and 2018, including Canberra, Australia; Chiang Mai, Thailand and Cardiff, U.K., to name but a few.