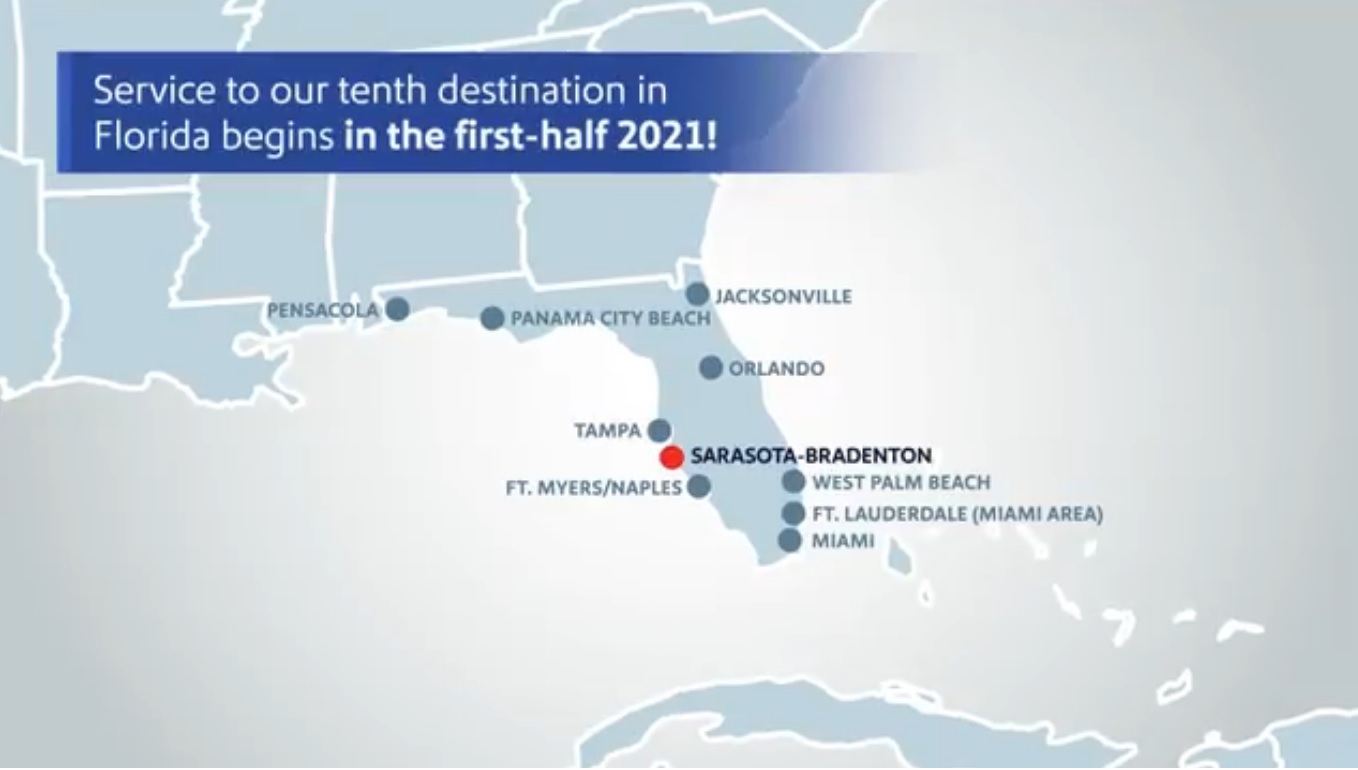 DALLAS, TEXAS, 2020-Nov-17 — /Travel PR News/ — Southwest Airlines Co. (NYSE: LUV) today (Nov 12, 2020) announced plans to expand its Florida service by adding flights at Sarasota Bradenton International Airport (SRQ) in first quarter of 2021. Sarasota will be the carrier’s tenth airport served in the State of Florida and is the tenth airport in a list of new places to join the Southwest route map in the coming eight months as the carrier furthers its reach of friendly policies, iconic Hospitality, and value and comfort. Service details including the initial flight schedule and fares for Sarasota-Bradenton will be announced soon.

“We’ll arrive in Sarasota-Bradenton as Southwest marks 25 years of serving the Sunshine State. Our Customers who choose SRQ will land closer to their preferred beaches and business meetings, benefiting from our added investment in the growing region between our longtime cities of Tampa Bay and Ft. Myers,” Steve Goldberg, Southwest Airlines Senior Vice President of Operations and Hospitality said. “Locals who fly Southwest can also pair their preferred airline and airport, and get in the air faster with a shorter drive to SRQ.”

“We are thrilled to welcome Southwest Airlines to the Sarasota Bradenton International Airport (SRQ). This is especially significant during these challenging times in aviation,” Rick Piccolo, President, CEO of the Sarasota Bradenton International Airport said. “Southwest’s low fares and renowned customer service will provide the bi-county community, as well as our inbound visitors, with access to the vast network of destinations that Southwest Airlines serves.”

In its 50th year of service, Dallas-based Southwest Airlines Co. continues to differentiate itself from other air carriers with exemplary Customer Service to a Customer base topping 130 million passengers in 2019. Southwest became the nation’s largest domestic air carrier in 2003 and maintains that ranking based on the U.S. Department of Transportation’s most recent reporting of domestic originating passengers boarded. In peak travel seasons during 2019, Southwest operated more than 4,000 weekday departures among a network of 101 destinations in the United States and 10 additional countries. In early 2020, the carrier added service to Hilo, Hawaii, and Cozumel, Mexico. Southwest will begin service to Palm Springs, California and Miami on Nov. 15, as well as two new seasonal destinations in Colorado, Steamboat Springs and Montrose (Telluride) on Dec. 19, 2020. In 2021, the carrier will add service at Chicago (O’Hare) on Feb. 14, and Colorado Springs on March 11, and has announced intended service next year at Houston (Bush Intercontinental), Savannah, Jackson, Miss., and Sarasota-Bradenton.

The carrier issued its Southwest® Promise in May 2020 to highlight new and round-the-clock efforts to support its Customers and Employees wellbeing and comfort. Among the changes are enhanced cleaning efforts at airports and onboard aircraft, face covering requirements for Customers and Employees. Additional details about the Southwest Promise are available at Southwest.com/Promise.