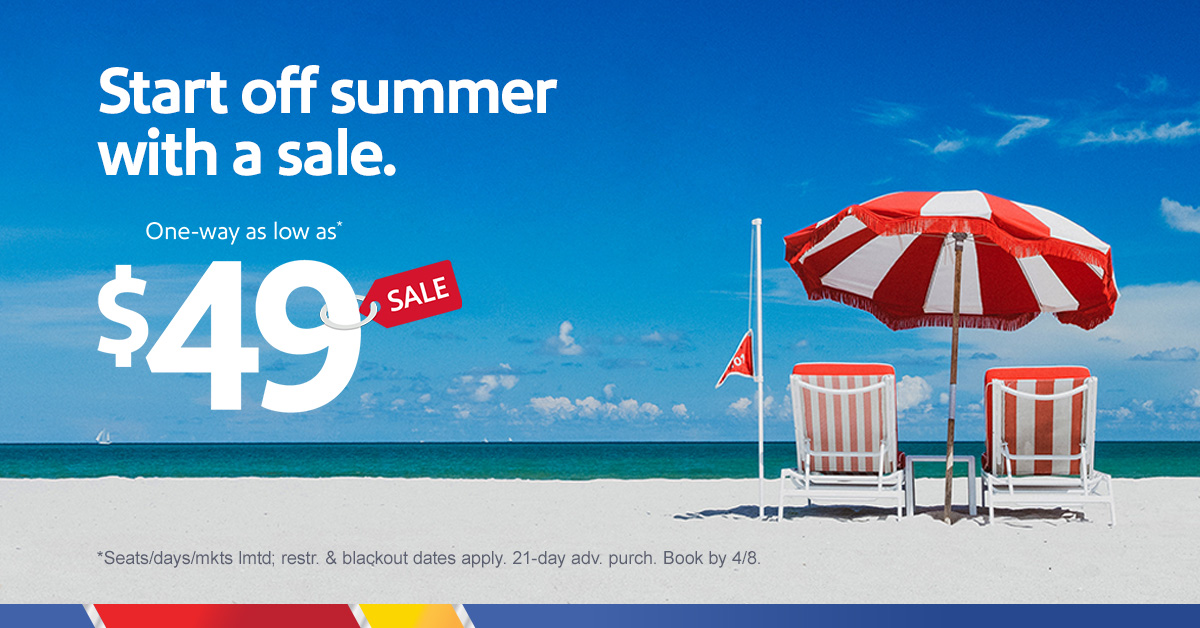 Feel the warmth of the sun reflecting off the beach waves at one of Southwest’s beach destinations, like San Diego, or Sarasota/Bradenton; or experience some great sightseeing while visiting Savannah/Hilton Head. With low fares, a growing network, and flexible policies (including no cancellation fees, no change fees, and bags fly free®)*, Customers can plan their perfect summer trip.

Seats, days, and markets are limited. Blackout dates and 21-day advance purchase requirements apply. See a full list of fares, fare rules, and terms and conditions below and at Southwest.com.

These flights, as well as the carrier’s published schedule through August 16, 2021, can be purchased at Southwest.com.

A 21-day advance purchase is required. Purchase today, March 30, 2021, through April 8, 2021, 11:59 p.m. Central Daylight Time. Continental U.S., San Juan, Puerto Rico, and international travel is valid April 20, 2021, through June 30, 2021. Travel continental U.S. to/from Hawaii is valid April 20, 2021, through May 26, 2021. Continental U.S. travel is blacked out May 27, 2021, through May 28, 2021; and May 31, 2021.  Except as otherwise specified, continental U.S. travel is valid only on Tuesdays and Wednesdays. Travel continental U.S. to/from Hawaii is valid Monday through Thursday. Travel to/from San Juan, Puerto Rico is valid Monday through Thursday. International travel is valid Monday through Thursday. Travel to Mexico is valid only on Sundays through Wednesdays. Travel from Mexico is valid only on Tuesdays through Fridays. Fares valid on nonstop service where indicated; if not indicated, fares are valid on single connecting service. Displayed prices include all U.S. and international government taxes and fees. Rapid Rewards® points bookings do not include taxes, fees, and other government/airport charges of at least $5.60 per one-way flight. Seats and days are limited. Fares may vary by destination, flight, and day of the week and won’t be available on some flights that operate during very busy travel times and holiday periods. Travel is available for one-way Wanna Get Away® fares. Fares may be combined with other Southwest Airlines® combinable fares. If combining with other fares, the most restrictive fare rules apply. Sale fares may be available on other days of the week, but that’s not guaranteed. Fares are nonrefundable but may be applied toward future travel on Southwest Airlines, as long as reservations are canceled at least 10 minutes prior to the scheduled departure. Failure to cancel prior to departure will result in forfeiture of remaining funds on the reservation. Any change in itinerary may result in an increase in fare. Standby travel may require an upgrade to the Anytime fare depending on Rapid Rewards tier status. Fares are subject to change until ticketed. Offer applies only to published, scheduled service.

*At Southwest Airlines, there are no change fees (fare difference may apply), no cancel fees (failure to cancel a reservation at least 10 minutes prior to scheduled departure may result in forfeited travel funds), and bags fly free (first and second checked bags, weight and size limits apply).

In its 50th year of service, Dallas-based Southwest Airlines Co. continues to differentiate itself from other air carriers with exemplary Customer Service delivered by more than 56,000 Employees to a Customer base that topped 130 million Passengers in 2019. Southwest has a robust network of point-to-point service with a strong presence across top leisure and business markets. In peak travel seasons during 2019, Southwest operated more than 4,000 weekday departures among a network of 101 destinations in the United States and 10 additional countries. In 2020, the carrier added service to Hilo, Hawaii; Cozumel, Mexico; Miami; Palm Springs, Calif.; Steamboat Springs; and Montrose (Telluride), Colo. Thus far in 2021, Southwest has initiated service to Chicago (O’Hare) and Sarasota/Bradenton both on Feb. 14; as well as Savannah/Hilton Head and Colorado Springs both on March 11; and will begin service to Houston (Bush) and Santa Barbara, Calif. both on April 12; Fresno, Calif. on April 25; Destin/Fort Walton Beach on May 6; Myrtle Beach, S.C. on May 23; Bozeman, Mont. on May 27; and Jackson, Miss. on June 6. The Company also has announced an intention to initiate new service to Eugene, Ore., and Bellingham, Wash., later this year.