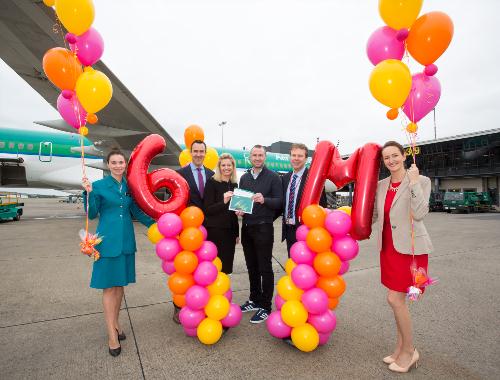 Shannon Airport celebrates its six millionth passenger through the airport since becoming an independent airport on January 1st, 2013

Shannon Airport had six million reasons to celebrate its independence today as a milestone passenger number was reached by the airport.

Shannon, Ireland, 2016-Sep-21 — /Travel PR News/ — Galway passenger Emmet Keary’s day took-off in more ways than one as he was surprised with a pair of Aer Lingus flight tickets to New York to celebrate reaching the six millionth passenger mark through the airport since Shannon became an independent airport operation on January 1st, 2013.

Originally from Loughrea, Co. Galway, Emmet has been living and working in Manhattan, New York, for the past ten years where he runs a successful Financial Technology Company, Capso Inc.

Surprised and delighted with his flight tickets Emmet said, “I never win anything so it was a lovely surprise.  I am going to give the tickets to my parents Mike and Anne who are living in Loughrea. They will be thrilled, my mother in particular as she hasn’t been out to New York in ten years. I had her lucky watch in my pocket this morning as she had asked me to get it fixed for her, so maybe that helped.”

Emmet is a regular traveller through Shannon and commenting on the airport he said: “Shannon is the best airport in the world to get through. You can get from the car park to the gate in a fraction of the time it takes at other airports.”  The milestone number was reached just over three and a half years into the airport’s life as an independent entity and just two years after it became part of Shannon Group plc, which also operates Shannon Heritage and Shannon Commercial Properties.

Acknowledging the support that the airport has received to reach the 6 million passenger mark, Shannon Group CEO Matthew Thomas said:  “Today’s celebration was made possible by a combination of efforts, the dedication and determination of our airport team working with our airline partners to deliver 35 destinations in 11 countries, combined with the tremendous support of our loyal airport communities along the western seaboard and internationally who have chosen to fly Shannon.  I would like to thank all of our stakeholders for their support and we look forward to continuing to work with them in the future. For our part we are committed to delivering more reasons for airlines and customers to choose Shannon as their gateway for business and pleasure.

“Shannon provides a key supporting role to the region from a tourism and business perspective. It is the only airport on the western half of Ireland with services to all three key Irish markets – the US, UK and Europe. There’s not another airport in Europe with our catchment that can boast this level of connectivity.  The great thing is there is capacity for further growth, not least through tourism given Shannon’s place as the natural gateway airport for the Wild Atlantic Way.  We look forward with confidence to the future and to building on a very solid platform.”

Aer Lingus Director of Sales Yvonne Muldoon said:  “Aer Lingus is delighted to celebrate this great milestone with Shannon Airport.  From Shannon Aer Lingus flies to key UK, European and transatlantic destinations. We can offer seamless connections from the Shannon region to popular North American cities such as Boston and of course New York with the facility to pre-clear US Immigration and Customs before taking off.  We congratulate the team at Shannon on their achievements and extend a warm congratulations to Emmet Keary on the being the ‘very’ lucky six millionth passenger!”

Shannon Airport Andrew Murphy, Chief Commercial Officer, Shannon Airport, said that a lot had been achieved since the airport was separated.  “It’s been a very busy and exciting three and a half years.  We’ve had the separation of Shannon Airport and then its amalgamation into the Shannon Group with our other business units.  Specifically from an airport perspective, to have delivered six million passengers in that time is no mean achievement. Following successive years of growth, over 25% in three years, we are now working to consolidating this growth.”