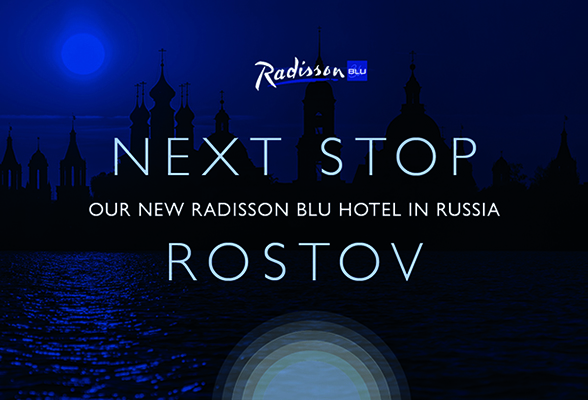 Rezidor strengthens its presence in Russia with signing of Radisson Blu Hotel, Rostov-on-Don

BRUSSELS, Belgium, 2016-Nov-07 — /Travel PR News/ — Radisson Blu, the iconic hotel brand driven by innovation and design, and AGROCOM GROUP LLC are delighted to announce the signing of the Radisson Blu Hotel, Rostov-on-Don, strengthening Rezidor’s footprint in Russia. Carlson Rezidor Hotel Group is already represented by 6 properties in Sochi alone, and 37 hotels with 10,300+ rooms in operation and under development across Russia.

The Radisson Blu Hotel, Rostov-on-Don will have 81 spacious rooms showcasing the new dynamic BluPrint interior design. The hotel is scheduled for opening in early 2017. The hotel will also feature a lobby bar, restaurant and spa.

“We are delighted to bring a new Radisson Blu Hotel to Rostov-on-Don and introduce our first BluPrint design in Russia. This innovative and dynamic interior style is a new direction for the Radisson Blu brand globally and we are looking forward to opening this beautiful property next year. Rostov is southern Russia’s largest and most cosmopolitan city, as well as an important industrial center and thus a perfect destination for our award-winning, upper upscale brand.” said Elie Younes, Executive Vice President & Chief Development Officer.

Sergey Sapotnitsky, CEO, “AGROCOM GROUP”, LLC added: “We are very proud and confident to partner with Carlson Rezidor Hotel Group as they have a broad network throughout Russia and experience in successfully operating international hotel brands in all segments. In anticipationof the World Cupnext year, which will come to Rostov as well, we will be ready to unveil world-class hospitality to our guests in proximity of key commercial, business, tourist and cultural sites”.

The hotel is located in the very center of Rostov-on-Don, on the main promenade overlooking the River Don in the central commercial and entertainment districts of the city. The hotel is located just 9km from the existing airport and 29km to the North-East of the new Rostov International Airport Yuzhny.

The Radisson Blu Hotel, Rostov-on-Don will be managed and operated by The Rezidor Hotel Group.

About Radisson Blu®
About Radisson Blu®  Radisson Blu® is one of the world’s leading hotel brands with nearly 300 hotels in operation in 69 countries and territories. Radisson Blu’s vibrant, contemporary and engaging hospitality is characterized by a unique Yes I Can!SM service philosophy, and all of its first class hotels offer a range of signature features that are empathetic to the challenges of modern travel, including the 100% Satisfaction Guarantee. Distinguished the world over as the brand with Hotels Designed to Say YES!SM, Radisson Blu offers a vivid visual celebration of leading-edge style where the delight is in the detail. Radisson Blu hotels are located in prime locations in major cities, airport gateways and leisure destinations across the world.

About Carlson Rezidor Hotel Group
Carlson Rezidor Hotel Group is one of the world’s largest and most dynamic hotel companies and includes 1,400 locations in operation and under development with more than 220,000 rooms and a footprint spanning 115 countries and territories. The Carlson Rezidor portfolio includes a powerful set of global brands: Quorvus Collection, Radisson Blu®, Radisson®, Radisson RED, Park Plaza®, Park Inn® by Radisson and Country Inns & Suites By CarlsonSM. Guests can benefit from Club CarlsonSM, a program that redefines hotel rewards with a collection of exceptional benefits, services, and privileges at more than 1,000 hotels worldwide. Carlson Rezidor Hotel Group and its brands employ 90,000 people systemwide and is headquartered in Minneapolis, Singapore, and Brussels. For more information, visit www.carlsonrezidor.com and follow on Twitter @carlsonrezidor.

About “AGROCOM GROUP”, LLC
Russian holding company that operates in tobacco, food industry, package industry, real estate and in the retail and consist over 40 companies with over 15 000 employees. Asset Management Company was founded in 2004 by Ivan Savvidi and located in Rostov-on-Don. Majority of the enterprises is located in the territory of the Southern Federal District of Russia. Subdivisions and branches of the companies are operating all over the country, in countries far and near abroad and in Europe. More details you can find on the web site http://www.agrokomgroup.ru