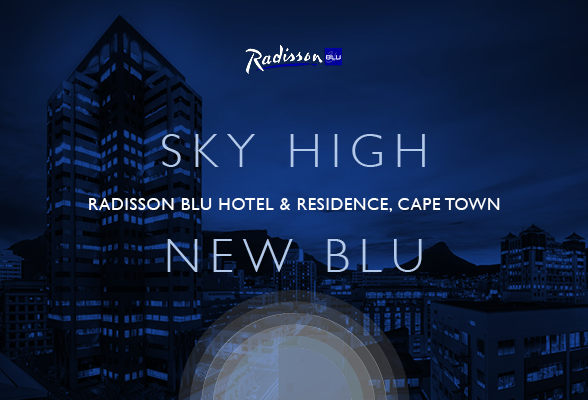 “We are delighted to open our first signature Radisson Blu hotel & residence in Cape Town and expand the presence of our iconic upper-upscale hotel brand in a dynamic destination like Cape Town, which continues to attract more international travelers year-on-year,” said Marc Descrozaille, Area Vice President, Africa & Indian Ocean, The Rezidor Hotel Group. “Our 10th hotel opening in South Africa is another firm proof of our focus on expanding in Africa. Today, Carlson Rezidor Hotel Group has 34 hotels in operation and under development on the African continent. The Radisson Blu Hotel & Residence Cape Town is also our first mixed-use property in South Africa, made up of fully-fledged upper-upscale hotel apartments, showcasing the diversity of our designer portfolio.”

This highest residential building in the Mother City has won several awards for its architectural design. It is situated on the corner of Riebeeck and Long Street in Cape Town’s foreshore. The Radisson Blu Hotel & Residence’s design is a beautiful mix of historic and ultra-modern. The 214-room hotel residence is within walking distance of all the city’s main tourist attractions and just a kilometer away from the Cape Town International Convention Centre (CTICC).

Desmond O’Connor, General Manager of the Radisson Blu Hotel & Residence Cape Town, says: “The iconic design of the building pays homage to the Art Deco design language and the same design direction has been applied in the public areas and to an extent in the bedrooms. In conjunction with this style, inspiration was also drawn from the natural elements of the city. The design and décor of the rooms thus create a cocoon and instils a welcoming calm to the traveller, something that is not commonly found in city hotels these days. It creates a sense of serenity.”

The hotel is set to take advantage of the influx of corporate travelers, as Cape Town fast cements its place as one of the world’s leading conference and exhibition capitals. Radisson Blu Hotel & Residence Cape Town offers a state-of-the-art executive business lounge and a range of modern meeting and conference rooms, all featuring the latest technology and amenities.

Radisson Blu’s very own signature concept, The Stratus Room, offers a dining experience that embraces the local cuisine with a mix of seasonality; beetroot or baby marrow – encompassing a theatrical approach to service. For those who want to get away from the hustle and bustle of Cape Town’s streets, The Ghibili Pool Bar and Terrace, located on the rooftop, provides a get-away lunch setting for the simple soup-goers or anyone who dares to take on the mouth-watering steak sandwich. The Sea Street Bar and Lounge is a perfect excuse for a cold tipple and savory nibble.

O’Connor says that Radisson Blu Hotel & Residence Cape Town aims to provide its guests with a world-class hospitality experience. “Our guests’ comfort is our number one priority, and we look forward to welcoming them to Cape Town’s newest and most contemporary hotel property,” O’Connor concludes.

Rezidor operates the core brands Radisson Blu® and Park Inn® by Radisson in Europe, the Middle East and Africa (EMEA). In early 2014 and together with Carlson, Rezidor launched the new brands Radisson RED (lifestyle select) and Quorvus Collection (luxury). In 2016, Rezidor acquired 49% of prizeotel. Rezidor has an industry-leading Responsible Business Program and is named one the World’s Most Ethical Companies by the US think-tank Ethisphere since 2010.

In November 2006, Rezidor was listed on the Nasdaq Stockholm, Sweden. HNA Tourism Group Co., Ltd., a division of HNA Group Co., Ltd.—a Fortune Global 500 company with operations across aviation, tourism, hospitality, finance and online services among other sectors—became the majority shareholder in December 2016.

The Rezidor Hotel Group and its brands employ more than 43,700 people in EMEA and is headquartered in Brussels, Belgium.