The inaugural flight signals the start of a four-time weekly service to Larnaca that will be operated by an Airbus A320, with 12 seats in Business Class and 132 in Economy.

The inaugural flight, which carried Qatar Airways dignitaries as well as commercial passengers, was greeted with a traditional water cannon salute, while the Chief Executive Officer of Hermes Airports, Mr. Wes Porter, led the welcoming committee.

Mr. Marwan Koleilat, Qatar Airways Chief Commercial Officer, said: “Cyprus is a fantastic destination and Qatar Airways is thrilled to be providing this new scheduled service to Larnaca. At Qatar Airways we strive to provide our passengers with a strong global network of business and leisure destinations, and the city of Larnaca is a welcome new addition to our extensive route map. Scheduled flights between Cyprus and Qatar have long been an aspiration for the airline and we believe travellers will truly appreciate our five-star service, together with the enhanced network of flights to more than 135 destinations around the world.”

The new route is expected to become a popular choice for both business and leisure passengers, expanding bilateral relations between Cyprus and Qatar. The launch of the airline’s flights to Larnaca signals a strengthening connection between the two countries that opens up new opportunities for mutually beneficial relations, by promoting and expanding economic and trade relations.

You may also be interested in:  Qatar Airways supports COVID-19 relief efforts in India

Commenting on Qatar Airways’ inaugural flight to Larnaca, the CEO of Hermes Airport Mr. Wes Porter, said: “The arrival of Qatar Airways at Larnaca is an important milestone not only for Hermes Airports but also for the Republic of Cyprus. This new route will not only promote and support tourism development between Cyprus and Qatar, but will also improve the connectivity of Cyprus to the East. Likewise, it will be an excellent opportunity for Qatar Airways to develop its accessibility to Europe through Cyprus. This inaugural flight is an opportunity to acknowledge the excellent cooperation between Cyprus and Qatar and we are looking forward to seeing further development of our business relations.”

Qatar Airways has recently taken advantage of their alliance network with the commencement of code shares with fellow oneworld member Cathay Pacific. The codeshare provide added benefits for passengers who already are able to take advantage of lounge access, increased connectivity and over 14,000 daily departures.

The DOHA – LARNACA service, which runs four times a week, will operate on;
Tuesdays, Thursdays, Saturdays and Sundays, according to the below schedule:

About Qatar Airways:
Qatar Airways is the national carrier of the State of Qatar. Currently undergoing rapid expansion, Qatar Airways is one of the fastest growing airlines operating one of the youngest fleets in the world. Now in its 17th year of operations, Qatar Airways has a modern fleet of 134 aircraft flying to 138 key business and leisure destinations across six continents.

You may also be interested in:  Qatar Airways continues its support of the Foreign Press Association Awards with the sponsorship of the ‘Journalist of the Year Award’

During the 2013 Dubai Air Show the airline placed orders for more than 60 new aircraft – a mixture of Boeing 777X and Airbus A330 Freighters. In total the airline has more than 300 aircraft on order worth more than US $50 billion. The airline will move into its new hub and home, Hamad International Airport, in 2014. For more information, visit our homepage www.qatarairways.com or our sites on Facebook, Twitter, Google+, Instagram, and YouTube. 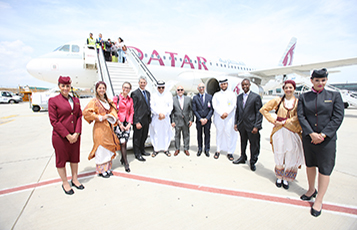