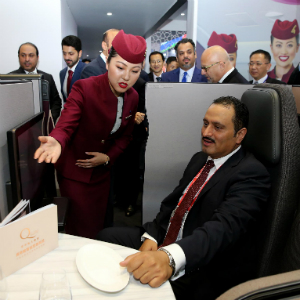 DOHA, Qatar, 2018-Nov-09 — /Travel PR News/ — Qatar Airways took centre stage at the China International Import Expo (CIIE), as it unveiled a host of its latest, state-of-the-art products and services. This included its award-winning Qsuite Business Class experience at an interactive stand, its unrivalled cargo offering and its services offered as part of Discover Qatar, the destination management specialist subsidiary of Qatar Airways, which plays a pivotal role in the growth of Qatar’s tourism industry.

Organised by the Ministry of Commerce of the People’s Republic of China and the Shanghai Municipal People’s Government, with the World Trade Organization, United Nations Conference on Trade and Development and United Nations Industrial Development Organization as organising partners, the CIIE is the world’s first national-level expo to be set up with imports as the theme, aiming to open up new channels through which countries can strengthen trade cooperation and drive economic growth.

Qatar Airways is showcasing its award-winning Business Class seat, Qsuite, in its signature quad configuration at the Expo. Qsuite features the industry’s first-ever double bed available in Business Class, as well as private cabins for up to four people with privacy panels that stow away, allowing passengers in adjoining seats to create their own private room, a first of its kind in the industry. Additionally, Qatar Airways Cargo, the world’s second largest cargo carrier, and Discover Qatar, the destination management specialist subsidiary of Qatar Airways, are participating at the Expo to promote their services and notable recent accomplishments.

Qatar Airways Group Chief Executive, His Excellency Mr. Akbar Al Baker, said: “We are very pleased  to be participating in the China International Import Expo, as Qatar Airways has long celebrated strong economic and trade links with China. The Expo comes just as Qatar Airways proudly celebrates 15 years of services to China, which we commenced in October 2003 with flights to Shanghai. Our commitment to China remains strong – as well as having a growing cargo offering in China, we now fly passengers to seven gateways in Greater China and most recently have introduced our patented Qsuite Business Class seat on our Shanghai route, giving passengers the best experience in the skies today.

“The China International Import Expo will provide Qatar Airways with additional exposure to key trade markets, while strengthening our existing relationship with the Chinese market. Participating in this inaugural expo further bolsters our presence in China.”

In October 2018, Qatar Airways celebrated 15 years of service to and from China, with its first flight to China beginning in October 2003 to Shanghai. Qatar Airways currently operates 45 weekly flights to seven Greater China gateways: Shanghai, Beijing, Guangzhou, Hangzhou, Chongqing, Chengdu and Hong Kong. In May 2018, Qatar Airways’ award-winning Qsuite Business Class experience debuted on the Shanghai route and will be welcoming Beijing-based passengers onboard from December 2018.

Last month, Qatar Airways Cargo commenced freighter services to Macau, the carrier’s fourth freighter destination in Greater China, after Guangzhou, Hong Kong and Shanghai. The carrier has also introduced transpacific freighter services, providing direct flights over the Pacific, from Macau to North America, resulting in reduced flight times and faster services for customers. China is a key market for Qatar Airways Cargo and with 75 frequencies each week that include freighters and belly-hold flights, the cargo carrier offers more than 3,800 tonnes of weekly cargo capacity to and from Greater China. Due to ongoing fleet expansion, innovative products and solutions, a growing global network and cargo revenue and tonnages rising each year, Qatar Airways Cargo is progressing rapidly, while offering unparalleled services to its customers.

Discover Qatar offers a wide selection of pre-bookable Doha city and desert tours for passengers transiting through Qatar. Tours include visiting key landmarks in addition to unique desert safaris. Discover Qatar also provides passengers with first-rate stopover packages, hotels and ground arrangements. In 2017, Nearly 45,000 Chinese tourists visited Doha, an increase of 26 percent compared to the previous year. The boost in tourism numbers from China is largely due to visa-free entry for Chinese nationals visiting Qatar and also increased promotion efforts by Qatar Tourism Authority after Qatar obtained the Approved Destination Status by the China National Tourism Administration in May 2018.

One of the world’s fastest-growing airlines, Qatar Airways currently operates a modern fleet of more than 200 aircraft flying to business and leisure destinations across six continents. The airline plans to launch a host of new destinations in 2018, including Gothenburg, Sweden; Mombasa, Kenya; and Da Nang, Vietnam.