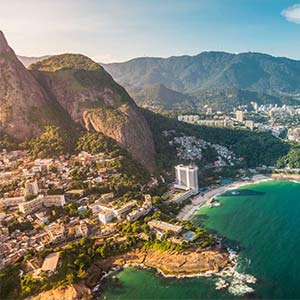 Qatar Airways began flying to Brazil in 2010 with a service from Doha, Qatar, to São Paulo, Brazil, and onwards to Buenos Aires, Argentina. Over the subsequent seven years, the award-winning airline has continued to strengthen its presence in the region. Qatar Airways recently announced it will commence a new service to Rio de Janeiro, Brazil, in 2018.

Qatar Airways Group Chief Executive, His Excellency Mr. Akbar Al Baker said: “This codeshare agreement between Qatar Airways and LATAM Airlines Brazil further strengthens the ties between Brazil and Qatar. We have witnessed significant growing demand between South America to Qatar and beyond. Our new codeshare destinations not only meet that demand, but provide a service for our valued passengers in Doha, and from dozens of destinations globally to new, exciting places to explore in Brazil. With this new codeshare, more than half of LATAM’s domestic destinations in Brazil are accessible to customers flying on Qatar Airways.”

Additionally, Qatar Airways Cargo has also expanded its footprint in South America, with commencement of freighter services to São Paulo, Brazil; Buenos Aires, Argentina; and Quito, Ecuador. Launched in February 2017, the new freighter service aims to meet the region’s growing need for import and export trade with the Middle East and Asia.

Part of LATAM Airlines Group and a fellow oneworld member, LATAM Airlines Brazil serves 44 destinations throughout Brazil, including 25 domestic airports from its hub in São Paulo Guarulhos Airport (GRU), offering seamless connections for Qatar Airways passengers travelling from Doha. As oneworld alliance partners, customers of both airlines are ensured recognition of their frequent-flyer status and benefits including access to lounges worldwide, through check-in, extra baggage allowance, plus accrual and redemption of miles, priority check-in and boarding across the carriers’ networks.

Celebrating 20 years of Going Places Together, Qatar Airways is one of the fastest-growing airlines operating one of the youngest fleets in the world, with 200 aircraft flying to more than 150 key business and leisure destinations across six continents. The airline recently added Dublin, Republic of Ireland and Skopje to its global network, soon to be followed by Prague, Czech Republic; Sohar, the Sultanate of Oman; and Kyiv, Ukraine.