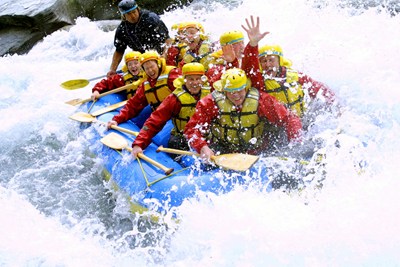 With around a hundred staff, the newly merged Go Orange will start on May 1st offering rafting, kayaking, cruising, cycling, ski and track transport and a range of coach connections in the region.

“The combined strengths of these three Real Journeys owned companies will give us a sharper focus, provide a greater range of options for visitors and enable the new Go Orange to build on its reputation as an active, fun, innovative, value brand,” says Real Journeys Chief Executive Richard Lauder.

The merger, which follows extensive consultation, was announced to staff last week and some of the key appointments have now been confirmed. All existing staff have been offered new roles in the merged company or within the wider Real Journeys Group. There have been no redundancies, and a number of new jobs have been advertised.

“This is an exciting development for us – the merger will enable us to create two very distinct tourism brands.  The Go Orange active adventures brand will complement Real Journeys premium positioning,” says Richard.

Tim Barke, General Manager of Queenstown Rafting and Kiwi Discovery for the last fourteen years, becomes the new Go Orange Head of Operations.  Tim says he is looking forward to the challenge and the opportunity that the merger of the three companies will open up.  “I’m really excited to be part of it.  With my previous life as a commercial skipper, I’m also really looking forward to being involved in the marine industry again, while still working with the current businesses and teams.”

Southlander Adam Wilson, who has worked in sales and marketing for the last twelve years, most recently as Queenstown Sales Manager at Go Orange, will lead the new sales team.  “Combining rafting and snow with our existing kayak and cruise products makes the future very exciting for Go Orange,” says Adam Wilson, Go Orange Head of Sales.

Go Orange is well known in Te Anau, where it has been based but will now have a stronger presence in Queenstown at the Queenstown Rafting shop in Shotover Street.  In an associated move, Cardrona Alpine Resort will also be more visible in Queenstown utilising the Kiwi Discovery shop in Camp Street.

The original company was set up in Doubtful Sound by Real Journeys in 2012, and started operating in Milford Sound rebranded as Go Orange a year later.  It offered alternative cruises with a quirky Kiwi twist.

Two years later sea kayaking was added to its range of activities in both in Milford and Doubtful Sounds.

On 1st May, 2017, Go Orange will be merged with Queenstown Rafting and Kiwi Discovery to create a strong active tourism company.