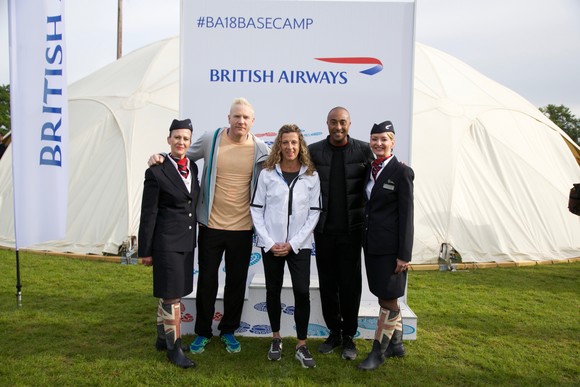 LONDON, 2018-May-14 — /Travel PR News/ — The first British Airways Run Gatwick took place today (Sunday May 13), with more than 3600 runners putting themselves through their paces on routes through the Sussex countryside and around Gatwick Airport.

The race, which incorporated an international half marathon, a corporate 5K and a family run attracted runners of all ages and abilities, with elite, club and amateur runners from the UK and abroad as well as a number of British Airways employees.

British Airways Flying Start ambassadors Colin Jackson CBE, Sally Gunnell OBE and Iwan Thomas MBE joined the day’s activities, representing the global charity partnership between the airline and Comic Relief. Welsh former sprinting and hurdling athlete Colin Jackson was the official starter for the International Half Marathon. Meanwhile, former track and field athlete and Olympic gold medallist Sally Gunnell took part in the pre-race airline themed warm-up and started the Family Run. Sally was joined in the warm-up by Iwan Thomas, the Welsh former European and Commonwealth 400m champion, who went on to start the Corporate 5K before jumping in to run himself.

Sean Doyle, British Airways’ Director of Network and Alliances, added, “We are delighted to have partnered with Run Gatwick on this race which has been a great success and enjoyed by all.”

The choice of race distances aimed to encourage runners of all ages and abilities to get active and enjoy the experience of a big sporting event. The races took place on fully-closed routes through the parks, towns and beautiful West Sussex countryside around Gatwick Airport, and the race village was located in Southgate park.

For further information or images, please contact the British Airways press office on 0208 738 5100 or email press.office@ba.com