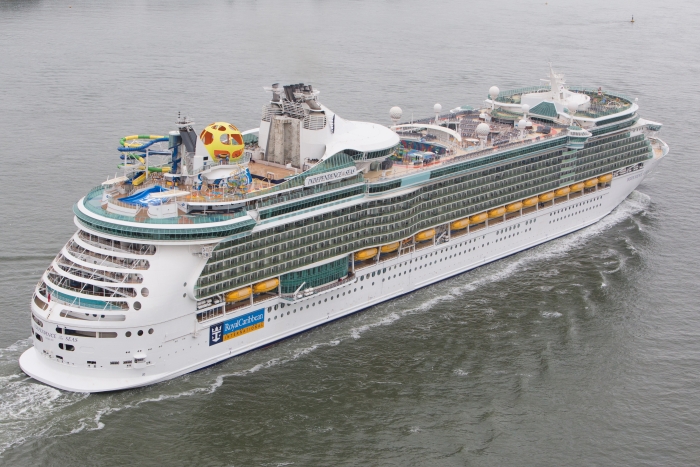 Royal Caribbean International’s Independence of the Seas arrived today (12th May 2018) at her new home in Southampton, following an extensive multi-million pound makeover as part of the global cruise line’s Royal Amplified program. The reimagined Independence touts the first-ever virtual reality, bungee trampoline experience in Sky Pad– a new thrill expected to be a favorite amongst adventure seekers of all ages. Additional new features designed for an amped-up family vacation are Battle for the Planet Z, a glow-in-the-dark laser tag experience; The Perfect Storm duo waterslides and a new Escape Room: The Observatorium challenge where competitors solve a series of high-tech riddles to unravel a mystery. Not to mention the addition of new dining venues, from Fish & Ships- a seaside seafood spot with freshly battered fish and chips and other guest favorites. Credit SBW Photos

London, UK, 2018-May-14 — /Travel PR News/ — Independence of the Seas, voted the UK’s favourite cruise ship*, and one of the Royal Caribbean International fleet, arrived today at her new home in Southampton, amped up with all new experiences and boasting even more extraordinary features after her amazing, family-focused multi-million pound makeover.

Dubbed ‘the ultimate family ship’, Independence of the Seas has an array of stunning new features to delight kids and adults alike. For the first time ever, guests can hop into the Sky Pad, an out-of-this-world new virtual reality bungee trampoline experience, and splash away their days at interactive aqua park, Splashaway Bay, which is bigger and better than ever before.

The reimagined ship also includes a host of other new features:

The icing on the cake is that all this can now be enjoyed by UK holiday makers with the added convenience of sailing from Southampton.

A real gem in Royal Caribbean International’s fleet of 25 ships, her return will not only add innovation, but also investment to the area, as each ship visit is worth an estimated £2million to the local economy – totalling a whopping £44million a year.

Managing Director, Royal Caribbean International UK and Ireland, Ben Bouldin said “Holiday time is precious, and travellers today have higher expectations and more options than ever before. We don’t just want to meet these expectations, but smash them and redefine how to holiday. From our largest yet hibachi restaurant to a virtual reality bungee trampoline experience, Independence of the Seas is set to be the most spectacular ship sailing out of Southampton this coming season.”

Guests will be welcomed onboard for her first new sailing on 15th May 2018 where she will embark on a two-night cruise to Paris from Southampton. Guests can dabble in modern art at the fabulous Musée d’Orsay, explore the Normandy coast, visit glorious Versailles or take in iconic sights such as the Paris Opera, Notre Dame, the Arc de Triomphe and the Eiffel Tower.

Following her inaugural sailing, Independence of the Seas will call at destinations across Europe and the Mediterranean until November 2018.