Measurement laboratory on a Lufthansa A340-600 contributes to an important discovery that will help to protect the ozone layer.

Cologne, Germany, 2014-03-18 — /Travel PR News/ — Researchers at the University of East Anglia in Norwich, England, have made a new discovery that will play a significant role in halting ozone depletion. Their findings were published recently in the renowned scientific journal Nature Geoscience. Measurements collected in the flying laboratory on board the Lufthansa Airbus A340-600 “Leverkusen” as part of the EU-funded CARIBIC (Civil Aircraft for the Regular Investigation of the atmosphere Based on an Instrument Container) project mark a major step forward in establishing the existence of three previously undiscovered chlorofluorocarbon (CFC) gases.

One of them – CFC-113a – has increased rapidly in recent years. The aim now is to find out where these gases are produced and why they are increasing. That knowledge is crucial if successful countermeasures are to be taken to reduce them, as was the case with previously detected CFCs. Up to now, only seven of these gases have been identified. CFCs are regarded as the main cause of ozone depletion. The same is also true of a recently discovered hydrochloro¬fluorocarbon (HFYC), an interim substitute for CFCs.

Once a month for the past ten years, the flying laboratory has taken off with Lufthansa in the interest of science and research. Over that time, the aircraft has logged well in excess of two million km. More than 50 different gas and particulate compounds have been recorded at a cruising altitude of between eight and 16 km – in a layer of the atmosphere that is of particular scientific interest. Here neither satellites nor ground-based equipment can measure climate-relevant parameters with anything like the same degree of accuracy.

You may also be interested in:  First ten aircraft of the type Airbus A350-900 will be based in Lufthansa Hub Munich

The automated measuring container, which weighs 1.5 tonnes, was developed and equipped jointly by ten research institutes from five European countries under the direction of the Max Planck Institute for Chemistry in Mainz. A special inlet system mounted on the fuselage of the Lufthansa Airbus enables aerosols and trace gases to be analysed with the aid of 20 scientific devices that are integrated in the container. The data collected in this way will continue to contribute to a better understanding of a sensitive region of the Earth’s atmosphere: the buffer zone between the troposphere and the stratosphere. For photographs relating to this subject, please click here. 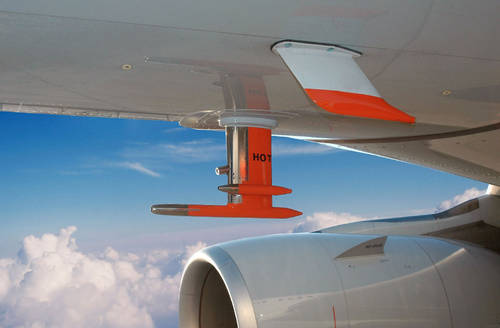