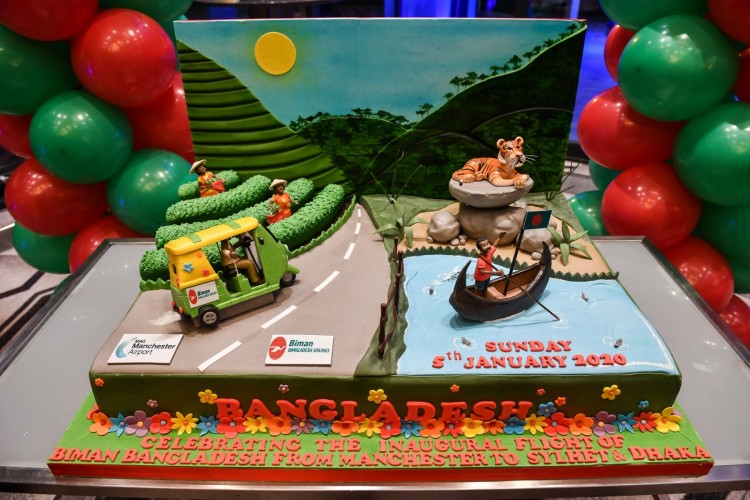 Manchester, UK, 2020-Jan-08 — /Travel PR News/ — The launch of a direct air route between Manchester and Bangladesh will be the catalyst for a new era of collaboration between the two locations.

Biman Bangladesh Airlines celebrated the inaugural flight from Manchester Airport to Dhaka and Sylhet last night, at an event attended by civic leaders and representatives from the Bangladeshi community across the North.

The three-times-a-week service has been welcomed by the more than 70,000 people of Bangladeshi origin living in the North and comes on the back of a delegation led by Greater Manchester Mayor Andy Burnham travelling to both cities in October.

Following that visit, and last night’s launch of the Biman service, a series of further activities are planned to foster closer ties between the city region and Bangladesh.

In the coming months, delegations from Dhaka and Sylhet will visit Manchester to explore opportunities in a range of business, cultural and educational fields.

A return trip will take place later in the year, with Greater Manchester representatives travelling out to share expertise in areas such as infrastructure and waste management. This work builds on the signing of a Memorandum of Understanding by Mr Burnham and the mayor of Sylhet, the north eastern city where most of the Bangladeshis living in the North hail from.

Andrew Cowan, CEO of Manchester Airport, who was part of the delegation that travelled to Bangladesh at the end of last year, said: “There is no better way to mark the start of a New Year than with the launch of an exciting new long-haul route from Manchester Airport like this one.

“We know there is a significant Bangladeshi community across our catchment area and this Biman Bangladesh service will be hugely popular with friends, family and business contacts travelling in both directions.

“And we are confident it will also open up a wide range of fresh collaboration opportunities between Greater Manchester and both Dhaka and Sylhet.

“This will build on the foundations laid by the successful Mayoral visit in November, during which the desire to forge closer ties was clear to see and I want to thank Andy, Coun Jabbar and our other partners for their support in securing the return of this important route.”

Bangladesh’s national airline will operate the routes from Manchester to Dhaka and Sylhet on Sundays, Tuesdays and Thursdays, with a flight time of just 10 hours. The carrier will utilise two brand-new Boeing 787-9 Dreamliners, with 24 seats in business class and 247 in economy. Economy fares start from just £580 return and business class return fares are available from around £1,500. The service will fly from Manchester to Dhaka via Sylhet and will then return to Manchester from Dhaka directly.

Dhaka, Bangladesh’s capital, is a vibrant megacity with over 20 million inhabitants in its wider urban area. It accounts for around 35 per cent of the country’s economy and its Mughal-era Old Quarter is packed with historic and cultural sights.

Sylhet is the largest city in Bangladesh’s north-east, with 800,000 people living in its metropolitan area. A large proportion of Northern England’s Bangladeshi population can trace its roots back to the Sylhet region, which is home to some of the oldest tea estates in the country.

There are up to 300,000 people of Bangladeshi origin in northern parts of the UK, from Birmingham to Scotland, for whom this service will be their closest direct route to Bangladesh.

Mayor of Greater Manchester, Andy Burnham, said: “When I visited Bangladesh last year, one of the main missions for our trip was to re-establish a direct air connection between Manchester and Bangladesh. It is wonderful to see it actually starting service and we are confident that this link will bring trade, cultural and educational benefits to Greater Manchester and the rest of the country. Just as importantly, it should provide a vital travel route for the friends and families of people of Bangladeshi heritage living in Greater Manchester and further afield.

“I will never forget my first trip to Bangladesh and have agreed to set up new partnerships with my counterpart Mayors in Sylhet and Dhaka to focus on a wide range of development and trade issues as well as collaboration on tourism, sport and culture. I am certain that the growing cooperation between our cities and countries will only increase demand for this direct service.”

“I want to welcome travellers to Greater Manchester and the wider North of England – you are welcome and we look forward to sharing our wonderful part of the world with you.”

Biman’s Regional Manager, Debabrota Mallick, said: “A direct flight from Manchester to Sylhet, and Manchester to Dhaka has been on our radar for quite some time. As part of our business strategy, our main focus has been to connect Manchester to both these thriving parts of Bangladesh. Not only was this due to high demand from the Bangladeshi community in the North, but we also saw a good opportunity to increase tourism and business potential which has been increasing year-on-year.

“After announcing the resumption of the Manchester flight, we saw the first two weeks of flights being completely sold out. We are very pleased to see such an amazing response, and more Bangladeshi passengers continuing to book through Biman Airlines.”

Passengers on the inaugural flight were greeted with a balloon arch and light refreshments at check-in and the festivities continued at the departure gate, with a traditional Bangladeshi dance performance and free gift bags given to passengers while they boarded. Manchester Airport CEO Andrew Cowan and representatives from the airline also gave speeches.

For more information on the destinations served by Manchester Airport, and for the latest news, visit https://www.manchesterairport.co.uk/.