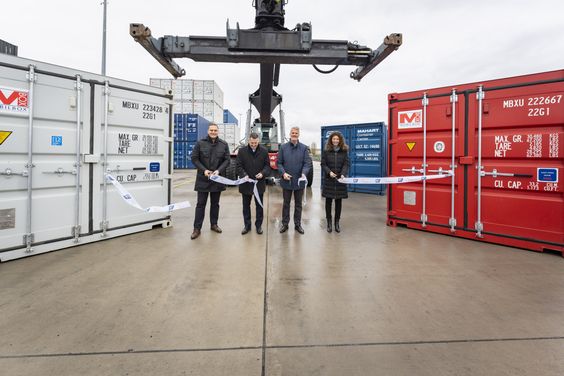 Budapest, Hungary, 2022-Dec-01 — /Travel PR News/ — Mahart Container Center, one of Hungary’s leading container terminal operators, has leased a new, 30,000 sqm operational area at Budapest Airport from September, which the tenant is using for storing shipping containers. The major advantage of the site is that it has excellent road connections, and can store up to 2800 TEU containers (twenty-foot equivalent units). The agreement brings Budapest Airport another step closer to becoming an intermodal hub. The establishment of the storage area is part of a series of development projects for which the European Union’s Connecting Europe Facility (CEF) has provided 14,841,000 EUR in funding in 2018.

In September, Mahart Container Center (MCC) took possession of the approximately 30,000 square meter operational area that Budapest Airport has established with support from the European Union, near the industrial rail track at the airport. MCC will primarily use the leased space to store empty containers, to supplement its existing container terminal in Csepel. The partnership is an important step towards intermodality for Budapest Airport; MCC will transport the containers to the requested location mainly by road.

“There is huge potential at Budapest Airport in terms of air freight transport, and even more potential if we look beyond the world of air transport,” said René Droese, Chief Development Officer for Budapest Airport. He added: “There is fierce competition between countries in the region for intermodal freight developments and investments. Here in Budapest, we have excellent conditions – logistics environment, infrastructure – for this, so we are delighted to welcome Mahart Container Center as one of the first representatives of intermodality at the airport as we jointly put Hungary at the center of the economic map of the region.”

You may also be interested in:  AirAsia Super App Launches #AyokemBALI Campaign to Bring Tourists to the Iconic Island of the Gods and its Hidden Gems

“The lease of the container depot at Budapest Airport fits perfectly into MAHART Container Center’s business policy. The area has excellent characteristics, it is easily accessible and is suitable for storing a large amount of containers. The containers stored here will help to relieve congestion at our Csepel terminal, contributing to efficient operations. By using the new depot, we will be able to serve new business partners, which will give us the opportunity to further develop environmentally friendly intermodal transport solutions,” said managing director Zoltán Fábián.

The final destination for air cargo arriving at Budapest Airport is not necessarily Hungary. In many cases, the cargo handled here is also used to supply other Central and Eastern European countries. Freight transport plays an extremely important role in supplying the economy and commerce, and thus, Hungarian society. Since its handover, the BUD Cargo City has been making steady progress towards becoming the leading aerial gateway to East-Central Europe, and opening to intermodal transport could further strengthen its role as a regional freight handling hub.

The development of the container terminal site is part of a major infrastructure development project for which the European Union’s Connecting Europe Facility (CEF) provided a total of 14 841 000 EUR in grants in 2018.

The contents of this publication do not necessarily reflect the position of the European Commission. The opinions expressed are those of the author only.