London, UK, 2014-1-2 — /travelprnews.com/ — A survey of 2,000 people for London City Airport has found that the average person in the UK has visited seven countries in their life.

The research, published today, found that almost one third (31%) of Brits have visited 10 or more countries, with one globetrotter claiming an impressive tally of 42.

The culture of Amsterdam seems to be a big attraction for male travellers, with more than one in three men having visited the city compared to just a quarter of women, making it the second most visited European capital city behind Paris.  Women are more likely to have visited sunnier climes for their holidays.

The survey found that people do most of their exploring before the age of 24, with adults under 24 having visited an average of 5.2 countries, growing to 7.5 for 35-44 year olds and 8.6 for the 55 and over age group.

The seven most visited countries by Brits are;

The stats highlight the cosmopolitan make-up of modern British families – with almost half of people (47%) having relatives living overseas – as well as revealing our adventurous streak, which has led to 43 per cent of us jetting off to celebrate a special occasion abroad; half of those did so for a birthday and one in ten for Christmas.

The Brits’ penchant for backpacking could explain why 12 per cent of people have been able to make the 24 hour journey to Australia and 6 per cent have made it to Thailand.  The same percentage has visited Hong Kong, falling to 4 per cent for China and South Africa.

Younger people are more inclined to take to the skies than their older counterparts – less than one in ten of those aged over 45 have been abroad in the last year compared to one in five aged under 45.

More than three quarters of the countries in the world have been visited by less than 5 per cent of Brits.

Declan Collier, CEO of London City Airport said:  “Overseas travel is no longer seen as a big deal, it’s become almost as normal as catching a train.  This has led to more people feeling comfortable with last minute getaways, leaving packing to the night before an early morning flight, and travelling regularly for business and pleasure.

“With so many people having relatives living abroad, we have seen a change in the airport’s usual predominantly business passenger profile over the last couple of weeks, as families have been travelling to be together over the Christmas and New Year period.  We also see people travelling in search of the snow, and even some taking advantage of the UK’s only year-round Ibiza service to let their hair down over the holidays.”

OnePoll surveyed 2,000 people on behalf of London City Airport.  Countries defined by the Foreign & Commonwealth Office, where the UK counts as one.  Infographic available in variety of formats. 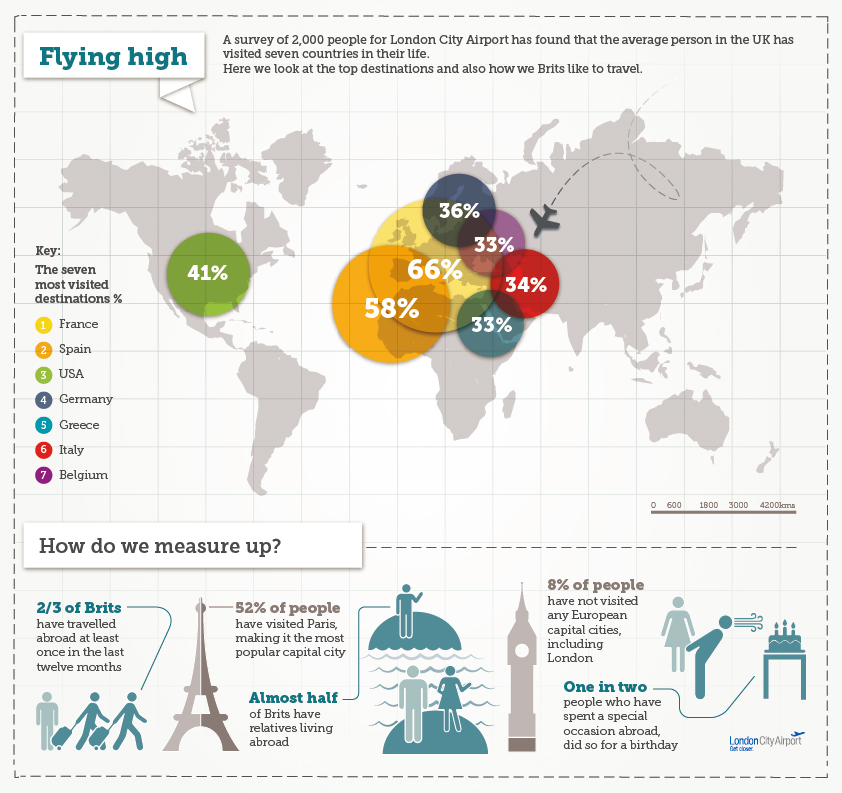