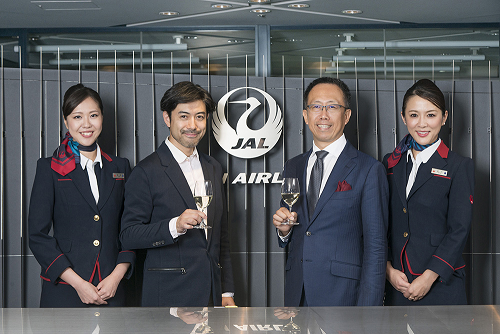 TOKYO, Japan, 2017-Jul-05 — /Travel PR News/ — Japan Airlines (JAL) is pleased to welcome Kenichi Ohashi MW as JAL Wine Advisor. Mr. Ohashi passed the Master of Wine (MW) examination administered by The Institute of Masters of Wine in the U.K. in 2015, regarded as the highest standard of professional wine knowledge

With the support of Motohiro Okoshi and Kenichi Ohashi MW, who connects the world and Japan through wine and sake, we will contribute to cultivating a wine culture within Japan and boosting recognition of winemakers by introducing wines from around the world to Japan and wines produced in Japan to the rest of the world.

Master of Wine (MW) is an international qualification created in 1953 by the London-based Institute of Masters of Wine. It is regarded as the most prestigious qualification in the wine industry. With a history of 60 years behind it, there are only 354 MWs in the world including two Japanese MWs, which is evidence of the high degree of difficulty in acquiring MW. Kenichi Ohashi is the only Japanese MW residing in Japan.

Born in 1967. Native of Tochigi Prefecture. Developed his knowledge of wine and sake by managing the family sake retail business, Yamajin Co., Ltd., based in Utsunomiya City. Acquired the world’s highest wine qualification, Master of Wine, in 2015. Established a firm position in the global wine industry. Serves as a judge for many wine competitions across the world, such as the International Wine Challenge (IWC), held in London, one of the biggest wine competitions in the world. Awarded “IWC Personality of the Year 2016”