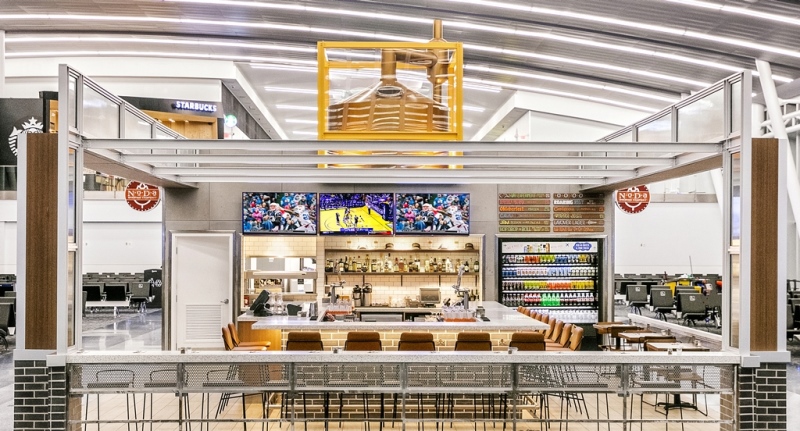 “With the NoDa opening, we’re bringing travelers unique hand-crafted brews and a true taste of the city’s drink culture,” said HMSHost Vice President of Business Development Stephen Douglas. “We’re thrilled to be a part of Charlotte Douglas International Airport’s new Concourse A Expansion and are thankful for our continued partnership to showcase the local flavors that enhance the traveler dining experience.”

At the new taproom, travelers can enjoy nearly a dozen beers on tap including NoDa’s signature Hop, Drop’n Roll, the gluten-free Super Jam, a rotation of seasonal brews, as well as the Layover Lager, a quintessential light Lager, which was created specifically for the opening of this new airport taproom. Travelers can even take NoDa’s beers with them as four-pack cans are available to enjoy at their final destination.

“We are delighted to welcome NoDa Brewing Company to Charlotte Douglas International Airport,” said CLT’s Chief Business and Innovation Officer m. “HMSHost continues to provide local and popular concepts that appeal to our more than 45 million yearly passengers.  An added bonus for us, our customers can experience a favorite Charlotte brewery while traveling through the airport and take home a taste of the Queen City as well.”

To complement NoDa’s signature beers, travelers can feast on an all-day menu of dishes. Some dishes incorporate the beers such as the Pork Belly and Smoky Chicken pizzas, each of which feature NoDa’s Ramble on Red in the BBQ sauce. Other menu highlights include salads, sandwiches, and tacos such as the Green Chili Chicken tacos and the Hot Turkey sandwich made with house-roasted turkey and local Queen Charlotte’s jalapeño pimento cheese. To get the day started, early morning travelers can select from a variety of breakfast dishes that are each served with seasonal fruit.

NoDa Brewing Company is a homegrown Charlotte brewery located in (and named after) the city’s most bohemian and artistic neighborhood—NoDa, named after North Davidson Street. The airport restaurant and bar features artwork from local designers that is reminiscent of NoDa’s main taproom in the city.