Belfast, Northern Ireland, 2013-10-17— /travelprnews.com/ — Stormont was the setting for a double celebration today as George Best Belfast City Airport marked the £100,000 milestone in its Community Fund which is set for further expansion.

The airport’s Community Fund, which currently provides significant financial support to youth projects within east Belfast, south Belfast and North Down, will now be open to youth projects and groups across greater Belfast.

The announcement was welcomed by politicians and community fund recipients who attended the celebration event in the Long Gallery.

Junior Minister Jennifer McCann MLA who sponsored the event with Jonathan Bell MLA said: “A significant number of local projects have been supported by the George Best Belfast City Airport Community Fund since 2009, Youth Projects, Women’s Groups, Primary Schools and Residents Associations. This is a considerable achievement and shows the breadth of the impact the Fund has made to the lives of local people in a relatively short period of time.

“The success of the fund would not have been achieved without the care, commitment and dedication of everyone involved. I congratulate everyone for their contribution in reaching this impressive milestone and I wish the fund continued success for the future.”

Junior Minister Jonathan Bell added: “Some sterling work has been supported by this Fund and I know that it has made a real difference to the local community. The list of groups supported is very impressive. More than 50 have been funded so far and this can only increase with the continued success and positive impact of these initiatives.

“The work delivered dovetails perfectly with the Executive’s commitment to improve attitudes of young people in Northern Ireland. We want to build a community where they can have a full and active role in developing good relations. The City Airport Fund has established itself as a strong partner in this work.”

The George Best Belfast City Airport Community Fund sees the airport fine airlines for operating late flights and, since its inception in 2009, has provided funding to more than 60 community groups, schools and projects in the airport’s neighbouring areas of east Belfast, south Belfast and North Down.

Michelle Hatfield, Human Resources and Corporate Responsibility Director at Belfast City Airport, said:
“We officially launched our Community Fund four years ago with the aim of complementing our already significant commitment to the local community.

“In addition to our Adopted Schools programme, recently launched Apprenticeship scheme and other environmental projects, the Community Fund has played an important role in assisting the airport to integrate and assist with local projects.

“We engage directly with the community to identify projects that can benefit from our Fund. This is primarily projects or groups that aim to promote community, social or environmental initiatives.

“To date, we have supported groups such as NI Children’s Hospice, Arthritis Care NI, Helping Hands Community Group and the Belfast Children’s Festival.

“Through the Community Fund, we want to support initiatives that can influence, educate and encourage young people from all backgrounds.

“Until now the Fund has been limited to east Belfast, south Belfast and North Down, but due to its success, we will now be considering applications from the entire greater Belfast area.”

Michelle continued: “Since the launch of the Community Fund we have had great support from politicians, many of whom regularly take time to visit the projects with our staff. I’m delighted that so many of them made it along to Stormont today to help us celebrate the success of the Community Fund so far and its expansion.”

The Community Fund committee, which includes staff of all grades from the airport, meets to discuss funding several times per year. Deadlines for applications are January and June. 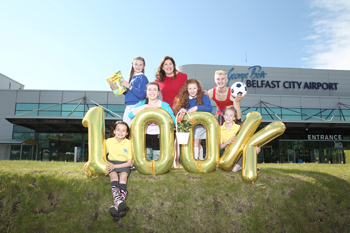