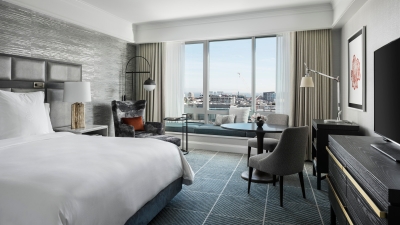 Guests and locals return to the “Living Room of San Francisco,” welcomed by new General Manager

As the Forbes Travel Guide Five-Star Hotel celebrates its 20th anniversary on October 11, guests can still expect to experience a sophisticated oasis above Market Street for a much-needed getaway.

The Hotel’s central location puts guests close to culture and arts, from San Francisco Museum of Modern Art to Museum of the African Diaspora; Chase Center and Oracle Park for games and concerts; the latest start-ups; and buzzy restaurants.

The Hotel’s 46 suites are ideal for workcations or staycations, with elevated views of Yerba Buena Gardens or downtown San Francisco. The Veranda Terrace offers a chic open-air venue for private events with downtown vistas of the Contemporary Jewish Museum and the new Four Seasons Private Residences at 706 Mission.

As the Hotel reopens for guests, they will be greeted by the many friendly faces of employees who have been with the Hotel since opening in 2001; as well as new faces, including the welcome introduction of Konrad Gstrein as General Manager.

“Four Seasons Hotel San Francisco was the first hotel in the city to receive a Forbes Travel Guide Five-Star award, a distinction it still holds today,” says Gstrein. “More than ever, our team is excited to elevate our interactions with guests through simple and meaningful experiences again, while showcasing the best of San Francisco and our urban retreat.”

A 21-year Four Seasons veteran, Gstrein’s Four Seasons career took him far, climbing on the rooms side of operations at various properties before becoming Resort Manager in Maui in 2012; Hotel Manager at Beverly Wilshire, A Four Seasons Hotel in Beverly Hills in 2014; and finally General Manager in Toronto in 2017. Under his direction, the Hotel received a Forbes Travel Guide Five-Star (for eight consecutive years), and The Spa recently received its Five-Star award.

Introducing the new chef-in-residence program, Executive Chef Marco Fossati will temporarily oversee culinary at MKT Bar, in-room dining and at intimate events in the fall. No stranger to the Bay Area, Chef Fossati was the Executive Chef of Four Seasons Hotel Silicon Valley before his time at Four Seasons properties in Santa Barbara and Vail, Colorado.

Known for his outgoing, guest-centred personality, Fossati’s passion for creativity and for connecting food with people will shine on the new menu.

The Hotel continues to enhance its services and offerings with unexpected experiences created by the concierge team, who have exclusive access to people and places that are quintessentially San Francisco. Curated family activities are also available during the popular summer and holiday months.

Around the corner from the San Francisco Museum of Modern Art and other museums and galleries, the Hotel’s own contemporary art collection features 90 paintings, sculptures, prints and works in glass by more than 40 California-based artists.

Connect further with professional glass artists through a hands-on hot shop glassblowing experience with Public Glass, followed by a transformative visit to Montague Gallery in Union Square, the only gallery of its kind in San Francisco, specialising in contemporary fine art glass. The hot shop is perfect for couples, or for multi-generational families looking for unique experiences with teen children.

“There are endless ways to explore San Francisco and its environs,” says Gstrein. “As the Bay Area continues to reopen, our guests have the opportunity to create new memories. We invite them to discover the new and revisit favourites, and then return to Four Seasons for a luxurious respite.”

For more information on Four Seasons Hotel San Francisco, MKT, or to book the next getaway to San Francisco visit the Hotel online or call 415 633 3000.