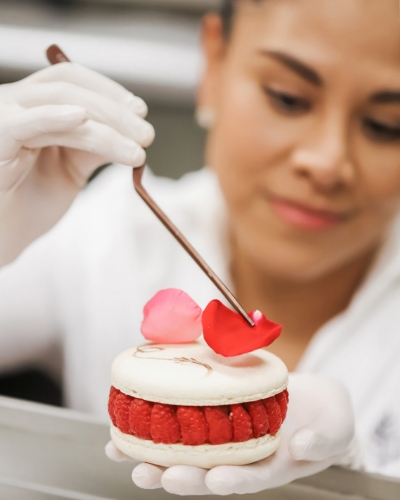 Dallas, U.S.A., 2021-Jul-29 — /Travel PR News/ — The culinary team at Four Seasons Resort and Club Dallas at Las Colinas welcomes Yudith Bustos as the new Executive Pastry Chef. Transferring from Four Seasons Hotel Washington, DC, she brings with her sugar, spice and lifetime of experience. Although her tenure with Four Seasons spans over a decade, she has been making magic in the kitchen for as long as she can remember.

“Dreaming, designing, creating something from scratch – I’ve always been fascinated by how a few ingredients could come together into a delicious work of art,” says Bustos.

Raised in a small town in Costa Rica where her family were farmers, Bustos always felt most at home in the kitchen. After a friend enlisted her help at her newly opened pastry shop, she knew she had found her calling. Shortly after, Yudith enrolled in culinary classes at Instituto Nationnal de Aprendizaje Culinary School and O’Sullivan Culinary School in San Jose, Costa Rica before beginning an internship at the Inter-Continental Hotel in San Jose.

Bustos joined the Four Seasons family as the Pastry Chef de Partie at Four Seasons Resort Costa Rica at Peninsula Papagayo in 2008. She then moved to Four Seasons Hotel Washington, DC in 2013, as Pastry Chef de Partie and continued to hone her craft while working (baking) her way up to Executive Pastry Chef in 2018. Her insistence on perfection and wild creativity provided opportunities to impart her expertise and work alongside peers at Four Seasons properties in Nevis, Dallas, and Paris. In 2019, Bustos was honoured to represent the Brand at Four Seasons Pop Down London, one of a global series of invitation-only immersive events celebrating the artistry and passion of Four Seasons craftspeople around the world. Her trip across “the Pond” began with a staging at two-Michelin-starred La Dame de Pic London. In 2020, she was spotlighted in USA Today as one of 10 female chefs who were elevating the food scene in the Nation’s Capital.

Since her arrival in June 2021, Bustos has already made an impact on the culinary offerings through innovative dessert menus for the Resort’s signature restaurant LAW, the bar and patio, OUTLAW Taproom and the seasonal poolside al fresco dining outlet, Agave Pool & Bar. She has also launched a new program of amenities served in-room in addition to bringing the wedding cake operation back with an upgrade and modernised approach.

“I enjoy making all types of desserts, but I really love making wedding cakes,” she says, noting that she was blessed with “the finer touch and attention to detail” that it takes to craft original and elaborate nuptial designs.

“I was taught, ‘You can never make a mistake on wedding cake because they’re too important,’ so, my style became perfection,” says Bustos.

And she couldn’t be a more perfect addition to the culinary team.