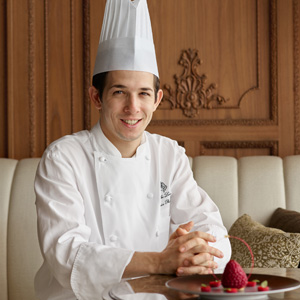 St. Petersburg, Russia, 2018-Jul-17 — /Travel PR News/ — There’s need to book a flight to Paris to enjoy an exquisite chocolate patisserie, and as for pure and refreshing Asian desserts, they can now be tastes with a stunning view of Saint Isaac’s Cathedral.

Nicolas Lambert’s style is authentic and easy to recognise: there is always an abundance of chocolate coupled with vivid local tastes such as chestnut, coconut with lychee and jasmine, or apple with blueberry. “I love working with seasonal ingredients. Also, I use only three or four textures and maximum three tastes in one creation. My desserts might seem complex but, in fact, they are very simple,” he says.

Lambert got his passion for pastry arts from his parents. At the age of two, he started learning at the family bakery in northeastern France. His mother and his father still bake croissants there every morning. Later, Nicolas Lambert got his degree as a chocolatier and worked throughout France, from Epinal to Cannes. By the moment he moved to Hong Kong, he already had 10 years of experience working at the hotels and patisseries. Caprice restaurant, which at that moment had already been featured in the Asia’s 50 Best Restaurants list, became the first restaurant in Lambert’s career. Just one year later he was awarded as the Best Pastry Chef in Hong Kong and Macau (Tatler Awards 2016). In 2018, after celebration of his 30th birthday, Nicolas became Asia’s Best Pastry Chef according to The World’s 50 Best Restaurants.

At Four Seasons Hotel Lion Palace St. Petersburg Nicolas is now Head Pastry Chef. The menu of The Tea Lounge restaurant will be the first to change, but in a while guests will be able to taste his desserts also at Percorso and Sintoho restaurants as well.

There is a also very special surprise for wedding couples: now they have a chance to order a wedding cake created by the best Asia’s Pastry Chef.