Aberdeen, Scotland, 2016-Oct-13 — /Travel PR News/ — After being crowned ‘Low Carbon Vehicle Operator of the Year’ at the much respected Low Carbon Champion Awards last month, the UK’s leading bus operator, First Bus, has been nominated for a total of 12 prizes at the UK Bus Awards, the bus industry’s equivalent of the Oscars.

First Bus has achieved a variety of nominations including Making Buses a Better Choice, the Marketing Award and the Environment prize.  First Bus colleagues are also short-listed in the Top Driver and Young Manager of the Year categories.

Managing Director of First Bus, Giles Fearnley, said: “Across all corners of our operations our teams are working hard to deliver great bus services for our customers.  I’m therefore very proud that the talent and commitment of my colleagues, and their efforts to encourage more people to use the bus, have been recognized with 12 nominations across a wide variety of categories at the Bus Oscars.

“I’m especially pleased that of the three shortlisted Local Authority Bus Project of the Year entries, First Bus features in two.  Across the UK forming every stronger partnerships with local councils is top of our agenda – working together is absolutely key to achieving bus passenger growth, modal shift and battling the increasing problem of congestion in our town and city centres.

“I was delighted that First Bus won the ‘Low Carbon Vehicle Operator of the Year’ title last month and we’re very hopeful of celebrating some more success at the UK Bus Awards in November.”

Those shortlisted from First Bus are:

The winners of the UK Bus Awards will be announced at a ceremony in central London on 23 November 2016. 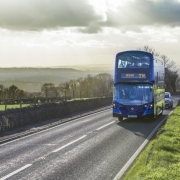 First Bus nominated for 12 prizes at the UK Bus Awards